BY hellodrdavis on October 16, 2018 | Comments: one comment
Related : Hot News, Soap Opera, Spoiler, Television, The Young and the Restless 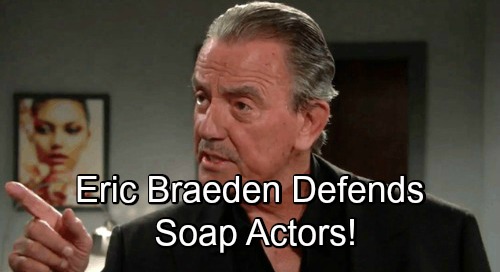 The Young and the Restless spoilers has some news to report about a twitter war that ignited recently and a Y&R star’s center role in it. Eric Braeden, who portrays Victor Newman on the CBS soap, responded angrily and forcefully to another actor’s tweet in which the actor put down soap operas and soap acting in general.

It all started when actor Daniel Newman tweeted the following: “I love and hate being forced to watch soap operas in the waiting room at doctor’s. God the whispering fake acting…fake pauses…fake over acting expressions. Painfully funny and just painful.”

Daniel Newman is an actor, musician, and model, who has appeared in several TV series, including The Walking Dead, Homeland, and The Vampire Diaries.

As you might expect, the tweet got a lot of attention, as there are a LOT of die-hard soap fans on twitter. Many soap fans blasted Daniel and his tweet, and before long Daniel deleted the tweet. But by then, his tweet had been copied and re-tweeted numerous times, so it kept on living and generating comments.

One fan re-tweeted Daniel’s tweet, copying various soap actors, including Eric Braeden, and asked for comments. Braeden responded by tweeting: “Before you open your arrogant, condescending mouth, WHY DON’T YOU TRY IT, BOY!!!”

And Eric Braeden wasn’t the only soap vet to respond. Colleen Zenk, who portrayed Barbara Ryan on As The World Turns, replied: “Get a real job. If you can. #weworkourassesoff.”

Daniel Newman hasn’t responded to Eric’s tweet, nor has he commented further on his original post. Stay tuned to the CBS soap and don’t forget to check CDL often for the latest Young and the Restless spoilers, updates, and news.

Before you open your arrogant, condescending mouth, WHY DON’T YOU TRY IT, BOY!!!!