BY Heather Hughes on December 5, 2018 | Comments: one comment
Related : Hot News, Soap Opera, Spoiler, Television, The Young and the Restless 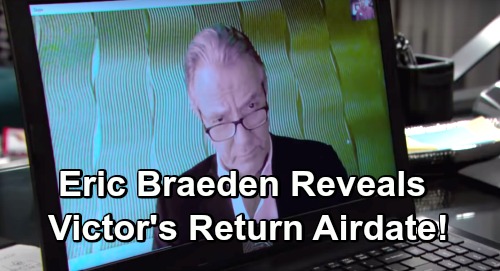 The Young and the Restless (Y&R) spoilers tease that a very big day’s looming in Genoa City. Victor’s return is less than a month away, so the drama’s about to heat up. Many Y&R fans have been missing Vic lately. You might love him, hate him or love to hate him, but he’s a staple on the CBS soap. Victor’s absence has been felt, especially during all the latest J.T. (Thad Luckinbill) chaos.

Nikki (Melody Thomas Scott) probably enjoyed not having Victor around to breathe down her neck. It’s easier to keep huge secrets when your husband is halfway around the world! However, Nikki is longing to spend time with Victor as well. Now that Victor has suddenly vanished, Nikki misses him even more. This mystery will deepen as Rey’s (Jordi Vilasuso) investigation brings major surprises.

Wednesday’s Young and the Restless episode brings some shocking new evidence to light. Victor’s gun, which has only his fingerprints on it, is found at the stables. Rey also uncovers a bloody shirt of J.T.’s, so Victor is named the prime suspect in this murder case. It doesn’t seem like a coincidence that Victor is suddenly set to go down for murder right as he disappears.

Victor is either being framed or playing some dangerous games to throw Rey off the trail. It’s tough to believe Victor is completely in the dark on Nikki and Victoria’s (Amelia Heinle) activities anyway. If Tessa (Cait Fairbanks) the former grifter can put the clues together, a devious mastermind like Victor can do the same. He’s always got an excellent team of investigators backing him up.

However, there are certain things that don’t add up. Nikki will land in danger due to a vicious attack soon. That’s something Victor obviously wouldn’t orchestrate himself, so a fierce enemy may be lurking. Victor has been seen in phone calls and video chats recently, but he’s desperately needed in the flesh. He’ll want to be around as Nikki fights for her life on Christmas.

When can Y&R viewers expect to see Victor back on screen again? Eric Braeden himself revealed the answer! On Twitter, Braeden shared his next airdate with fans and got everyone excited about what’s ahead. “I‘ll see you all on FRIDAY, DEC 21st,” Braeden said. He included a sweet pic of Victor and Nikki, which was also featured on Y&R’s Instagram account.

The Young and the Restless spoilers say Victor and the rest of the Newman clan will face plenty of holiday turmoil. Will Victor be arrested the second he gets back? Will he get off the hook and visit ailing Nikki? We’ll give you updates as other Y&R news comes in. Stay tuned to the CBS soap and don’t forget to check CDL often for the latest Young and the Restless spoilers, updates and news.

I‘ll see you all on FRIDAY, DEC 21st pic.twitter.com/nNSM9vxBgf