The Young and the Restless Spoilers: Eric Braeden Speaks Out on His Health – Shares Big News with Fearful Fans 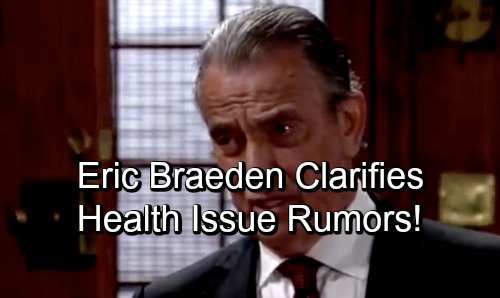 The Young and the Restless (Y&R) spoilers tease that Victor (Eric Braeden) will face a tough blow soon. On a new Y&R episode June 25, his medical files will be leaked in a shocking news report. Pat Harvey will fill the public in on Victor’s health crisis. She’ll suggest that Victor’s battling a serious illness and may not be able to stay on at the company.

However, Victor will deny that he’s got one foot in the grave. He’s indeed had some health woes thanks to that fall down the staircase and the stroke that followed. Victor was in a coma for a while, but he eventually woke up and got out of the hospital ASAP. He was anxious to head back to the ranch and work on his recovery there.

Things have been going pretty well, but Victor will admit to seeing a specialist. He has to do everything he can to make sure his recovery stays on track. The Young and the Restless fans have certainly noticed that Victor’s not quite himself lately. He seems weak and unsteady, so some viewers have been concerned about Vic’s portrayer.

After receiving some worried messages on social media, Eric Braeden decided to set the record straight. He wanted to let everyone know he’s doing just fine in real life. Braeden hopped on Twitter and noted that he’s heard some comments about his “condition.” He suggested that it’s all part of playing the part.

Braeden said, “I’m an actor and when I’m in a storyline involving a fist fight and a tumble down the stairs and a subsequent COMA, I’m going to play the Consequences of that to the best of my ability! But I, ERIC BRAEDEN,am fullofpee&vinegar!!!” Naturally, that was a huge relief to fearful Y&R watchers. It’s good to know that Braeden’s A-OK and can keep entertaining us on the CBS soap.

In the Twitter replies, several fans praised Braeden for making his post-coma role believable. If people think Braeden actually looks sick, that means he’s playing it right. As for Victor, let’s hope he’ll make a full recovery. The Young and the Restless spoilers say he’ll have to tackle more Newman drama, so he could certainly use his strength.

Are you excited about the looming Newman chaos? Is this a little karma for what Vic did to Nick (Joshua Morrow)? We’ll give you updates as other details emerge. Stay tuned to Y&R and don’t forget to check CDL often for the latest Young and the Restless spoilers, updates, and news.