BY Marcy Cohen on September 12, 2018 | Comments: one comment
Related : Soap Opera, Spoiler, Television, The Young and the Restless 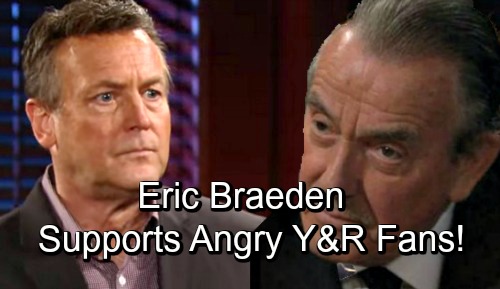 The Young and the Restless (Y&R) spoilers reveal that a major CBS soap star is supporting angry fans. Eric Braeden is known for his portrayal of the great Victor Newman, but some Y&R watchers aren’t loving how his character’s being written. Many viewers are turning against the show as a whole as well. There are plenty of complaints if you go on Twitter and check out the Y&R hashtag.

Braeden took notice of some tweets that his supporters sent him. He decided to retweet a couple of crucial ones, which said a lot about his personal feelings on the matter. Even though Braeden didn’t say these words himself, the fact that he’s putting them on his Twitter page is a very big deal. Braeden’s taking a stand and spreading a clear message here.

One person he retweeted said, “I am so unhappy with the writing for Victor I just gotta say. Fangless Victor is not why we watch. Even when I hate the character he is interesting. But they are not doing your character any favours. Who did you piss off? it seems intentional and I am not happy.”

Braeden wouldn’t spread the word if he didn’t agree. If everything was fine and dandy, Braeden would be retweeting fans who said they loved Victor’s latest writing. Of course, it’s tough to find any tweets like that! Again, most Young and the Restless fans are dissatisfied with the direction of the show as judged by what appears on social media.

Another retweet indicated Braeden’s support for Doug Davidson (Paul), who recently revealed that he’d been let go from Y&R. “I have just learned that the wonderful Doug Davidson has been fired from @YandR_CBS,” an outraged fan said. “After 40 years! This is a disgrace. Shame on you @CBS You have destroyed this show.”

By retweeting about Y&R’s destruction, Braeden is certainly making his feelings known. He’s also taking the month of September off for a trip to Germany, which could be a sign of behind-the-scenes tension. Braeden may be taking a break since he’s apparently so fed up.

Y&R’s head writer and executive producer, Mal Young, must be feeling the heat right about now. When both fans and the show’s cast start turning against you, trouble’s usually brewing. Will Mal Young be fired eventually? A former Y&R head writer, Josh Griffith, was recently hired by the CBS soap – that can’t be a vote of confidence in Young’s work. Viewers will have to wait and see, but things aren’t looking good for Y&R’s showrunner at the moment.