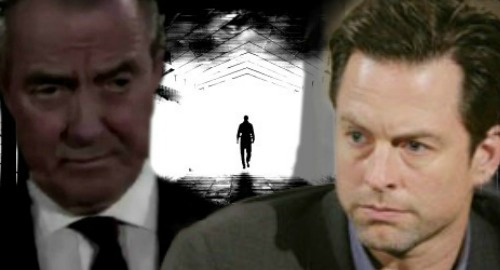 The Young and the Restless spoilers tease that Eric Braeden’s (Victor) planned month off in September, where he was visiting with friends, serves as the right time for the Moustache to discover that his lamented deceased son is actually alive. Yes, Adam (as last played by Justin Hartley) has not turned to dust!

Braeden’s planned month-long vacation means that viewers won’t be seeing Victor regularly come early November, as daytime dramas record episodes approximately six weeks in advance. A terrific lead-in to the Black Knight’s exit would be having Victor learn of a clue regarding Adam’s whereabouts, thus sending him on a fact-finding mission to an undisclosed location.

Victor needs his second-born son right now. Dark Horse is rising, which means that New Nick (Joshua Morrow) won’t be close with his father anytime soon. Of course, this would suggest that a resurrected Adam would side with his dad over his half-brother.

Assuming Adam is alive and will be located by Victor, it would be natural to believe that short-term well wishes could exist between these formerly estranged characters. Tenured fans know that Adam’s supposed death in early September, 2016, was actually preceded by a meeting of the minds with his dad.

Both men settled their differences after Victor orchestrated Adam’s escape from custody. The one-on-one meeting Braeden and Hartley had at the fated cabin in the woods was very touching, as was Nick’s meeting in the prison visitor’s room prior to that event. Yes, Nick also parted ways with Adam on good terms.

An easy projection would have Adam come back to Genoa City full of gratitude. Victor would revert to form soon after, necessitating Adam’s storm-out and hire at Dark Horse.

Some type of creative call-back to the land of the living is needed in order to restore a personality that fans have been clamoring for. Adam is a beloved character for sure.

While Chris Engen first filled the adult Adam role, a recast, Michael Muhney, drove this dark personality to unbelievable heights during a run that ended in December, 2014, with his Adam last being seen in January, 2014. Hartley became the next recast when he debuted in November of that same year.

Muhney’s era is widely recognized as the most dynamic and, to be fair, was more than double that of Hartley’s. However, Hartley delivered a memorable performance and has also been missed since he left the cast.

Of course, it is possible that both actors could eventually return to the show at the same time, as Hartley was actually playing a man who looked like Gabriel Bingham. Imagine if Victor finds that also supposedly dead man alive and he somehow leads him to Adam?

Possibly a recording hiatus at This Is Us would allow Hartley to briefly reprise that type of alternate role as part of an epic, two-punch revival? The buzz for either actor’s return would be immense. But two comeback’s? Only Victor could pull that off and maybe that’s what he will be seen doing next month.