BY Heather Hughes on December 7, 2018 | Comments: one comment
Related : Soap Opera, Spoiler, Television, The Young and the Restless 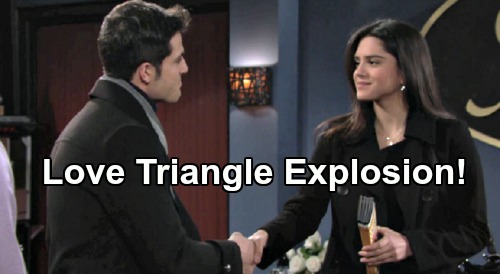 The Young and the Restless (Y&R) spoilers tease that Fen (Zach Tinker) won’t give up on his dreams. He’s eager to become a famous musician and wow the world with his talent. Of course, he’ll have to pay the bills in the meantime. Lauren (Tracey E. Bregman) and Michael (Christian LeBlanc) will make it clear that Fen can’t just come home and mooch off them. They love him, but he’s a grown man.

Fen will find a job he hopes will help him accomplish a different dream. This one involves his love life! From the moment Fen met Lola (Sasha Calle), he was immediately smitten. That’s a problem since Lola only has eyes for Kyle (Michael Mealor). However, Fen oozes confidence whether it’s justified or not. He believes he can win Lola over one way or another, so he’ll get started soon enough.

Fen will offer to pitch in with Lola’s food truck and catering service. He’ll admit he really needs the extra cash. Lola may have reservations about this arrangement, but she ultimately won’t see the harm. She feels secure in her relationship with Kyle, so she won’t view Fen as a threat. Lola will see Fen as more of an annoyance, but she’ll put up with him since she needs another pair of hands.

As luck would have it, Fen will join Lola’s team at the perfect time. A new gig will fall into Lola’s lap thanks to Abby (Melissa Ordway). Y&R spoilers say Abby will want to do something special for Devon (Bryton James). He’s been struggling lately, so Abby may think a nice dinner would help him relax. She’ll turn to Lola for help with this private catering project and hope that her plan pays off.

Due to this unexpected change in her schedule, Lola will have to cancel her date night. Kyle should understand…at least until he finds out who’s assisting as a waiter. Fen will push Lola to give him a date in exchange for his help, but she’ll make it clear that their relationship is strictly professional. Despite his disappointment, The Young and the Restless spoilers say Fen will view this as a great opportunity.

Since Fen wants to get on Devon’s streaming label, this is his chance to make a positive first impression. Fen will also earn points with Lola by stepping up for her, so it’ll be a win all around. The dinner will likely be a big success, the aftermath won’t be pretty. Kyle will feel like Fen’s relentlessly chasing Lola and he’s not going to like it one bit!