The Young and the Restless Spoilers for Next 2 Weeks: Reed Gets Startling News About J.T. – Mystery Woman Revealed 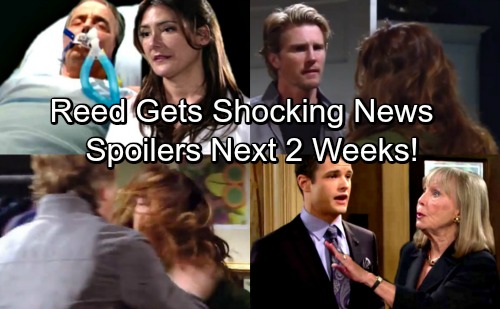 The Young and the Restless (Y&R) spoilers for the next two weeks tease that things are about to heat up in Genoa City. The week of April 9-13 will bring some great teamwork. For starters, Jack (Peter Bergman) and Billy (Jason Thompson) will work together on a new plan. They’ll hope they can wrestled control away from Kyle (Michael Mealor) at Jabot, but he won’t give up without a fight.

Of course, Billy and Jack will likely find a way to defeat Kyle eventually. They’ve got Ashley (Eileen Davidson) and Abby (Melissa Ordway) on their side as well, so it’s four against one. It’s clear that Kyle will have a hard time keeping the rest of the fam at bay.

Kyle outsmarted Jack once by going behind his back and joining forces with Victor. Now that Jack knows what his son’s capable of, he won’t want to be blindsided again. Unfortunately, Jack will indeed by hit with a shocker soon enough. Y&R’s keeping a lid on when the non-Abbott bomb will drop, but we’ll definitely see the next signs of trouble this week.

The Young and the Restless spoilers state that Dina (Marla Adams) will continue to ramble about her big secret. That’ll give Kyle an idea. He’ll think he needs to learn what it is and hopefully gain some ammunition to use against Jack. Kyle doesn’t realize that Dina could destroy his own world, too.

Elsewhere, Nick (Joshua Morrow) will encounter the woman who kissed Victor on the hand in the hospital. He’ll be shocked when he comes face to face with her. The Young and the Restless spoilers say the mystery lady will finally be revealed. Dr. Meredith Gates (Alicia Coppola) is an option many fans are considering. However, you should always be prepared for anything on the CBS soap.

Meanwhile, Victoria (Amelia Heinle) will break off her engagement with J.T. and lead to a real firestorm. He’ll come completely unhinged as he launches a vicious attack. It looks like J.T. will be killed by Victoria or one of the people who arrives to help. Sharon (Sharon Case), Phyllis (Gina Tognoni) and Nikki (Melody Thomas Scott) will definitely have Victoria’s back.

After the body’s dumped and concealed, the women will try to push past this horrific ordeal. That should be a tough task during the week of April 16-20. Reed (Tristan Lake) will get some startling news pretty soon. Will Victoria reveal that J.T.’s deceased or will she let Reed believe his dad fled from the cops instead? Either option would be unsettling for the teen.

Thanks to J.T.’s confession and some new evidence, Jack will also get off the hook for Victor’s attempted murder. That’ll free him up to go after Kyle, but Dina’s secret should throw them both for a loop eventually. Across town, Hilary will undoubtedly do a bit of scheming. Despite Devon’s (Bryton James) attempt to back out of their deal, Hilary won’t be willing to let this dream fade.

One way or another, Hilary just has to be pregnant. If she’s not already, you can bet she’ll try to change that. Y&R fans can expect Hilary to make a bold move at some point. Over with Paul (Doug Davidson), he’ll have to wade through some tough cases. Victoria could find herself on the hot seat, so stay tuned.