The Young and the Restless Spoilers: Friday, April 13 – Victoria Fights for Her Life as J.T. Loses Control – Death Ahead for Awful Abuser 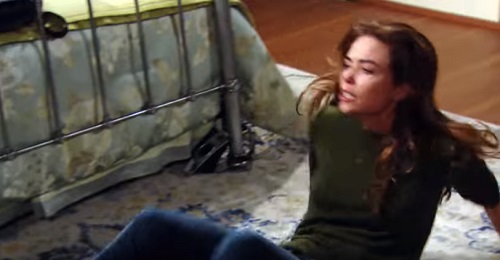 The Young and the Restless (Y&R) spoilers for Friday, April 13, tease that the drama’s about to explode on the CBS soap. Y&R’s building to some real chaos, so viewers should be on the edge of their seats. Let’s set the stage for the mayhem that’s about to unfold.

In Thursday’s episode, Victoria (Amelia Heinle) joins Sharon (Sharon Case), Nikki (Melody Thomas Scott), Mariah (Camryn Grimes) and Phyllis (Gina Tognoni) for a girls’ night. However, J.T.’s (Thad Luckinbell) unexpected arrival throws off the fun. Victoria refuses to accept his apology and insists that they’re through. She also reveals J.T.’s abuse to most of the other ladies at the party.

All of that should be important as Friday’s show gets underway. The Young and the Restless spoilers say Victoria will get plenty of support from her new gal pals. Everyone will be glad that she broke free from the monster. Unfortunately, that won’t truly be the case just yet. J.T. will be back and that’s not good news! 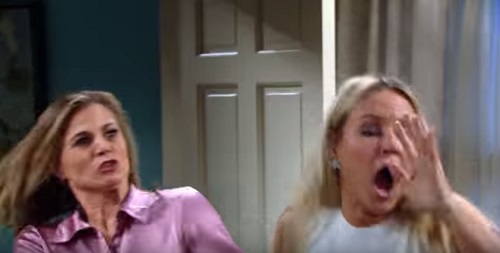 It looks like the party will either break up or leave the other guests distracted. That’ll spark some scary moments for Victoria. She’ll be alone in another room when J.T. suddenly appears behind her. Victoria will panic as she orders J.T. out, but he’ll refuse to exit. The Young and the Restless spoilers say we’ll see a fierce fight and a jaw-dropping confession.

J.T. will probably admit that he tried to kill Victor (Eric Braeden). He may spill the story of their brawl at the ranch and his later attempt at the hospital. J.T. might argue that Victoria drove him to this point. We all know how J.T. tends to play the blame game!

The Young and the Restless spoilers hint that J.T. will likely try to kill Victoria as well. His rage will be out of control on Friday, so Victoria will have a hard time getting away from him. Luckily, Sharon and Phyllis will rush in soon enough. They’ll undoubtedly help Victoria get a grip on the situation, but the aftermath won’t be pretty. Y&R fans can expect J.T. to die as his run wraps up.

Are you anxious to see the shocking conclusion of this controversial storyline? We’ll give you updates as other details emerge. Stay tuned to the CBS soap and don’t forget to check CDL often for the latest Young and the Restless spoilers, updates and news.

It’s Everything you NEVER Expected and it all starts today on #YR! pic.twitter.com/YEHjYejo3V