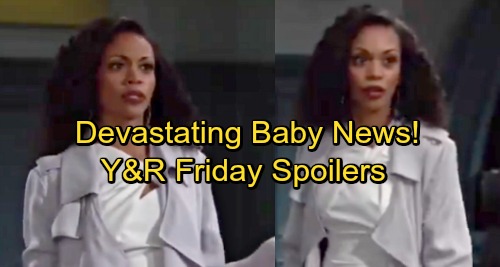 The Young and the Restless (Y&R) spoilers for Friday, April 27, tease that Hilary (Mishael Morgan) will face a devastating blow. Y&R fans know that Hilary’s home pregnancy test was positive, so she announced it live on her show. Her baby is already big news is Genoa City, but is there really a baby at all?

This is the perfect opportunity for a crushing twist. Since heartbreak’s ahead for Hilary, maybe the test was a false positive. Hilary’s doctor might run another test and reveal that she isn’t expecting. It’s also possible Hilary had a quick miscarriage, but a lack of pregnancy seems more likely under the circumstances. Y&R put all the pieces in play for Hilary to be wrong.

Will Hilary come clean to Devon soon or will she do some scheming to fix this? Time will tell, but this certainly isn’t the outcome Hilary wanted. Meanwhile, Arturo (Jason Canela) will come over to the ranch at Nikki’s (Melody Thomas Scott) request. They don’t know it yet, but Victor (Eric Braeden) has figured out their sexy arrangement.

The Young and the Restless spoilers say major drama’s brewing thanks to Victor’s knowledge. He’ll undoubtedly mess with Arturo a bit before sharing what he knows. Victor definitely won’t go easy on him. Perhaps a few threats will be tossed around on Friday. Nikki and Victor have an open marriage, but that hasn’t stopped jealousy from bubbling up.

Fortunately, Nikki will end to her fling soon enough. She’ll put a stop to the hookups on next week’s new Y&R episodes, so at least Arturo will be free of Victor’s wrath. Elsewhere, Victoria (Amelia Heinle) will reevaluate the whole J.T. (Thad Luckinbell) situation. She can tell that everyone in the cover-up crew’s on edge.

The Young and the Restless spoilers say Victoria will make a difficult choice. It looks like she’ll gather up the rest of the gang and offer to take the fall. Victoria will just want all this to be over, but the other women will try to stop her drastic move.

Another suspenseful episode’s on the way, so Y&R fans will want to tune in. We’ll give you updates as other details emerge. Stick with the CBS soap and don’t forget to check CDL often for the latest Young and the Restless spoilers, updates, and news.