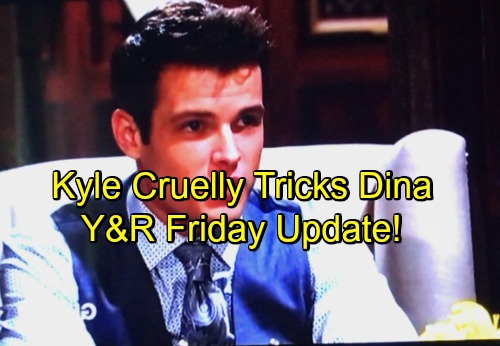 The Young and the Restless (Y&R) spoilers update for Friday, April 27, tease that Kyle (Michael Mealor) will seek the identity of Jack’s (Peter Bergman) father. To pull off his plan, he’ll take Dina (Marla Adams) out for a meal at the athletic club. Kyle will pretend he’s Dina’s old lover and encourage her to call him by his name. Dina will grow frustrated when she still can’t recall it.

Arturo will keep things vague, but Victor won’t be happy about his role in Nikki’s life. Later, Victor will tell Nikki that he doesn’t trust Arturo. He’ll indicate that they’re going to have a problem if Nikki sticks with him.

Over with Sharon (Sharon Case), she’ll reluctantly go with Nick (Joshua Morrow) to Reed’s party. Phyllis (Gina Tognoni) and Nikki will grow concerned about how jumpy Sharon’s been acting. They’ll know they need to keep the weak link under control.

Abby and Mattie (Lexie Stevenson) will also make appearances at Reed’s shindig. The latter will share some nice moments with Reed before he heads to boarding school. The Young and the Restless spoilers say Mattie will embrace Reed as he vows to return someday.

Billy (Jason Thompson) will give Reed some guidance and share a brief chat with Nick (Joshua Morrow). All the bizarre friendships will throw Billy and Nick for a loop. They’ll be surprised that Victoria, Sharon, Nikki and Phyllis have been hanging out so much. After the party wraps up, Reed will console an emotional Victoria. He’ll assure her that he doesn’t blame her for J.T.’s absence.

Hilary will also head to her OB-GYN on Friday. Unfortunately, she won’t get good news. Hilary’s doctor will reveal that Hilary only had a chemical pregnancy. It led to a positive test, but nothing implanted in her uterus. Hilary will be crushed, especially since Devon’s (Bryton James) bound to accuse her of lying.

When Hilary spots Devon and Simone (Shanica Knowles) at the club, she’ll push for a minute alone with her almost “baby daddy.” Devon won’t be willing to exclude Simone, so Hilary will just say she had an OB-GYN appointment earlier. She’ll decide to hide the truth for now.

At the TV studio, Mariah (Camryn Grimes) will show off a ton of baby gifts from fans. Hilary will get choked up as Mariah features them on the air. It sounds like keeping this secret could be harder than Hilary thought! We’ll give you updates as other Young and the Restless details emerge. Stay tuned to Y&R and don’t forget to check CDL often for the latest Young and the Restless spoilers, updates and news.