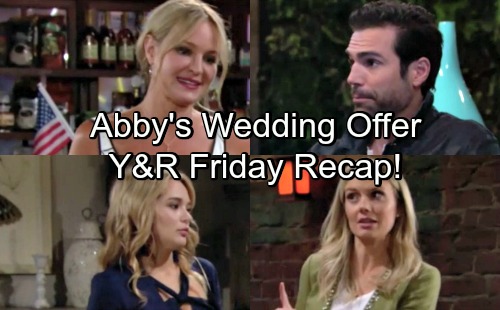 The Young and the Restless (Y&R) spoilers for Friday, August 17, tease that Nick (Joshua Morrow) will push Summer (Hunter King) to accept his offer. He’ll realize she’s the kind of gal who can be paid off. They’ll bicker before Billy (Jason Thompson) walks in and asks what’s up. Summer will toy with Nick a bit by showing Billy the check. She’ll indicate that her dad’s helping her out financially.

Billy will be surprised by the large amount, but Nick will argue that he’s doing the right thing. Later, Phyllis will catch up with Billy. She’ll fish for Summer info, so Billy will fill her in on all the money Nick handed over. Phyllis will get the picture and suggest that she should have a chat with her ex.

At the coffeehouse, Sharon (Sharon Case) will find Abby (Melissa Ordway) sitting with Arturo (Jason Canela). She’ll catch Abby off guard by asking her to be in the wedding. Abby will think this is coming from Nick, but Sharon will insist it’s all her. She’ll want patch things up between them by having Abby as a bridesmaid.

Abby will give Arturo a brief recap of the Scott (Daniel Hall) sex drama and how the cheating scandal hurt Sharon. She’ll feel like Sharon wants her to turn down the wedding party offer, which will offend the bride. Over with Ashley (Eileen Davidson), she’ll enjoy some jazz music and dancing with Neil (Kristoff St. John). They’ll eventually move their love fest from The Dive Bar to Neil’s place.

Back with Summer, she’ll assure Nick that his secret is safe. The Young and the Restless spoilers say Nick will express disappointment in his daughter. He’ll hate that it took money to keep her quiet. Summer will rant about Nick sleeping with Phyllis when he’s with Sharon. She’ll add that he should be with Phyllis instead, but Nick will think Summer’s just messing with everyone.

Afterward, Summer will give Kyle updates on Nick’s bribe and insist that the bet’s still happening. She’ll admit that she now wants more than just a fling. Summer’s interested in a real relationship with Billy, but Kyle will think that’s a bad idea. Billy’s been having sex with Summer’s mother, so Kyle will suggest that it’s too weird.

Nevertheless, Summer won’t let go of her plans. Y&R spoilers say she’ll head home and argue with Phyllis a little more. Once they’ve hashed things out, they’ll agree to try making peace and moving on. However, Summer won’t really mean it. She’ll just slip out of the apartment and end up making another move on Billy.

In Billy’s office, Summer will bring up their kiss and urge Billy to go after what he wants. He’ll reject her again and insist that this has to stop. After meeting a man named Rey (Jordi Vilasuso) at The Dive Bar, Nick will introduce him to Sharon at Crimson Lights. Rey will mention that he’s looking for a place to rent on a short-term basis.

Over with Arturo, he’ll make Abby see that she needs to lighten up. The Young and the Restless spoilers say Abby will offer Sharon an apology. She’ll take her up on the bridesmaid offer, so Sharon will be hopeful about her big day. She’ll want it to be a special celebration where everybody can come together.

Finally, Rey will be seen alone with an evidence board. Pictures of Victor (Eric Braeden), Nikki (Melody Thomas Scott), Victoria (Amelia Heinle), Phyllis, Sharon and Nick will surround a photo of J.T. (Thad Luckinbill). Sneaky Rey’s on a mission! We’ll keep you posted as other news comes in. Stick with Y&R and don’t forget to check CDL often for the latest Young and the Restless spoilers, updates, and news.