The Young and the Restless Spoilers: Friday, August 3 Recap – Devon Wishes Lily Were Dead Instead – Nick and Phyllis Fear Doom

BY Marcy Cohen on August 2, 2018 | Comments: one comment
Related : Soap Opera, Spoiler, Television, The Young and the Restless 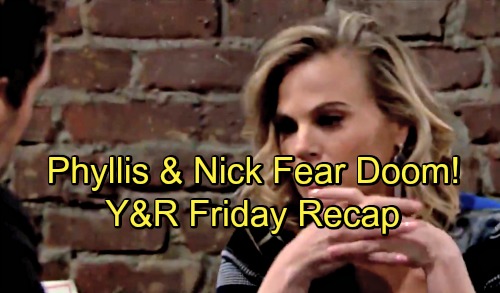 The Young and the Restless (Y&R) spoilers update and recap for Friday, August 3, tease that Paul (Doug Davidson) will interrupt the cover-up crew’s meeting. Phyllis (Gina Tognoni), Nikki (Melody Thomas Scott), Victoria (Amelia Heinle) and Sharon (Sharon Case) will all get a bit nervous. Paul will wonder if there have been any other J.T. (Thad Luckinbill) sightings, but Victoria will promise that she would’ve filled him in.

Talk will turn to Paul’s theory on J.T.’s disappearance. He’ll suspect that Victor (Eric Braeden) was involved, which will irk Nikki. She’ll accuse Paul of focusing on J.T.’s safety instead of his horrible behavior. Once Paul insists that he only wants justice, he’ll take off. Phyllis will point out that if Victor gets blamed for all this, it’s fine by her. She’ll head out and call Nick (Joshua Morrow) soon after.

Y&R spoilers say Nick will drop by Phyllis’ place for a chat. She’ll unload her frustration over Billy (Jason Thompson) and fear her love isn’t strong enough. If that’s not it, Phyllis will think she’s just a bad person. Nick will confess his own flaws and worry that he’ll mess up his relationship with Sharon. He’ll find it easy to open up to Phyllis and she’ll feel the same way.

At the cottage, Nick will embrace Sharon and mention their wedding plans. He’ll obviously be trying to put Phyllis out of his mind. Over at Jabot, Phyllis will plop herself on Billy’s desk and insist that they’re going to talk. She’ll refuse to let him shut her out this time. Billy will feel like a fool for standing in the way of their romance, so they’ll quickly kiss and make up.

Other Young and the Restless spoilers say Shauna (Camryn Hamm) will speak with Devon (Bryton James). She’ll think he must want rid of her, but he’ll disagree. Devon will note that they both loved Hilary and got love in return. He’ll think they have to stick together during this tragic ordeal. Devon will also praise Shauna for being brave enough to tell him the truth.

Charlie (Noah Alexander Gerry), on the other hand, won’t be as impressed. He’ll corner Shauna and blasts her for blabbing about Lily’s (Christel Khalil) role in the crash. It’ll certainly spark a fierce fight for the teens.

Meanwhile, Lily will show up at Hamilton-Winters. She’ll want to try talking to Devon, but Neil (Kristoff St. John) won’t think that’s a good idea. Devon could really use some space at the moment. When Devon walks in and sees Lily, he’ll immediately lash out. Fortunately, Mariah (Camryn Grimes) will be there to drag Devon away and settle him down.

At Crimson Lights, Devon will fume over how awful Lily was to Hilary. Mariah will point out that Lily’s dealing with unbearable guilt. The death of Hilary and her baby will haunt her forever. Devon will remain upset and furious, so Mariah will just pull him into a hug. Sometimes that’s all you can do!

Lily will approach Devon to apologize and assure him that she never wanted Hilary to die. She’ll note that could’ve died in the crash as well, which will prompt a cold comment. Devon will snarl there would’ve been more justice in that. It sounds like he wishes Lily was dead instead!