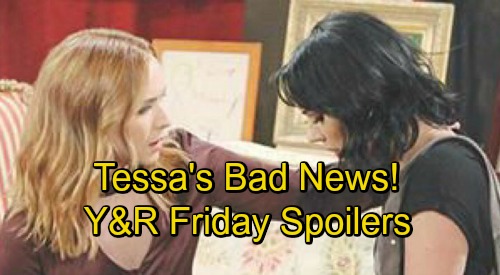 The Young and the Restless (Y&R) spoilers for Friday, August 31, tease that Mariah (Camryn Grimes) will have plenty of questions. Sharon (Sharon Case) gets a call about a prowler on Thursday, so Rey investigates and finds Tessa (Cait Fairbanks). She must have a good reason for creeping on the Newman property in the dark!

In Friday’s episode, Mariah will grill Tessa about where she’s been and why she didn’t contact her. It’s possible Tessa’s phone was swiped or she just didn’t think it was safe. Y&R spoilers say Tessa will have some disturbing news, so Crystal (Morgan Obenreder) could be in more danger than ever.

Mariah will gently place a hand on Tessa’s shoulder and offer some comfort. She’ll wonder what she can do to help, but Tessa may not be sure. Rey seems like a “take charge” kind of guy, so maybe he’ll have some ideas. As for Sharon, she’ll be wary of letting Rey any closer. It’s clear that he’s hiding some huge J.T. (Thad Luckinbill) shockers.

Other Young and the Restless spoilers say Victoria (Amelia Heinle) will handle a crisis. She’ll have to fix some damage, so there are several ways this could play out. Victoria may feel the need to jump in on the Rey situation or perhaps some work issues.

Then again, this could involve putting a fake smile on around Nate (Brooks Darnell) or Nikki (Melody Thomas Scott). They’ve both been breathing down Victoria’s neck lately. If she wants them off her back, Victoria will have to prove she’s fine – even when she isn’t!

Elsewhere, Cane (Daniel Goddard) will make a solemn vow. Just before Lily’s (Christel Khalil) appears in court, Cane may promise that everything’s going to be OK. No matter what happens, Cane might contend that their family’s going to stick together.

The Young and the Restless spoilers say Devon (Bryton James) will find himself standing alone. It sounds like he’ll refuse to back down on Lily’s punishment. Devon may reiterate that he’s going to push for the maximum sentence. The rest of his loved ones will side with Lily, but Devon’s craving for vengeance may be too strong to get past.

Y&R fans won’t want to miss the hot drama ahead. We’ll give you updates as other details emerge. Stay tuned to the CBS soap and don’t forget to check CDL often for the latest Young and the Restless spoilers, updates, and news.