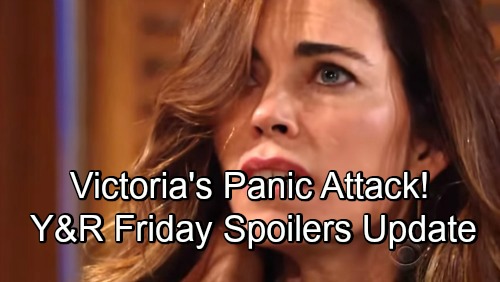 The Young and the Restless (Y&R) spoilers update for Friday, August 31, tease that Sharon (Sharon Case) will battle plenty of suspicions. After she inquires about Rey’s (Jordi Vilasuso) gun, he’ll argue that his hotel doesn’t have a safe. Rey will insist that he didn’t want to leave it out in his room. He’ll take off to let Tessa (Cait Fairbanks) explain her behavior to Sharon and Mariah (Camryn Grimes).

After hugs are exchanged, Mariah will want to know what’s been going on. She won’t understand why Tessa didn’t get in touch with her. Tessa will contend that she disconnected because she didn’t trust the person who walked in the room. As for the moments since then, Tessa will suggest she was just focused on getting back to Genoa City.

Sharon will still think Tessa’s hiding something, but Mariah will push her mom to back off. She supported Sharon and Nick’s (Joshua Morrow) relationship, so she’ll expect the same support for her own. Later, Mariah will grill Tessa about the rest of the story. She’ll note that Sharon can be awfully perceptive when it comes to secrets.

Tessa will admit there’s something she left out. She didn’t feel comfortable blabbing to Sharon, but she’ll be ready to spill to Mariah. It turns out Tessa had to pay $20,000 to some people in Canada. She needed their help, but now she has to pay it all back.

Mariah will be alarmed by Tessa’s urgent mission to raise the funds. Those people could come after Tessa if she can’t come up with the cash. Tessa will do her best to ease Mariah’s mind. She’ll just want to concentrate on the fact that she’s home.

Meanwhile, Cane (Daniel Goddard) will give Lily (Christel Khalil) a memorable romantic evening. She’ll fear that it could be her last one for the next 20 years, so she’ll want to make it count. Devon will spot their dinner together at the athletic club. It’ll lead to a tense conversation with Cane, who’ll be worried about what Devon intends to do in court.

Afterward, Michael (Christian LeBlanc) will find Devon and point out that Lily took full responsibility. Devon will know that Michael wants him to back down, but he just won’t be willing to do that. He’ll maintain that he has to get justice for Hilary (Mishael Morgan) and the baby.

Other Young and the Restless spoilers say Rey (Jordi Vilasuso) will rattle Victoria (Amelia Heinle). At Newman Enterprises, Rey will show up and note that his latest mission bothers her. He’ll insist that he just wants to find out who used J.T.’s (Thad Luckinbill) credit card. Victoria will fib that it must’ve been J.T. himself, but Rey won’t think so. He’s heard some info that suggests someone else is to blame.

Victoria will make Rey an offer in hopes of getting rid of him. She’ll want to repay the debt herself, but Rey will plan to stick around and get the real story. Once Victoria’s alone, she’ll get Sharon’s voicemail about Rey having a gun. Victoria will learn that Rey’s dangerous and should be kept at a distance. She’ll work herself into a tizzy and call Nate (Brooks Darnell) for assistance.

Nate will determine that Victoria had a panic attack. He’ll embrace her, but she’ll quickly shove him off. Victoria will promise not to bother Nate with her issues again, but you can bet he won’t let this go. Y&R spoilers say Nate will get too close to the truth, so that certainly won’t help Victoria cope.