BY Heather Hughes on December 26, 2018 | Comments: one comment
Related : Soap Opera, Spoiler, Television, The Young and the Restless 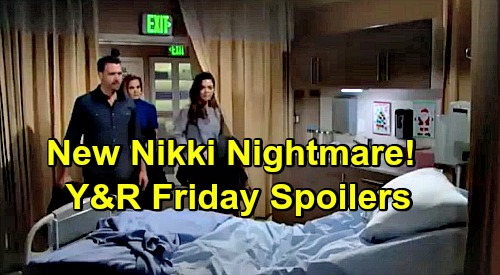 The Young and the Restless (Y&R) spoilers for Friday, December 28, tease that Nick Newman (Joshua Morrow) will lash out at everyone in his path. Since Nikki Newman (Melody Thomas Scott) goes missing from the hospital on Thursday, that’ll leave Nick determined to find her. He’ll refuse to let some kidnapper rob him of his mother – especially since she was finally improving.

However, the person behind this isn’t some dark force Nick has to worry about. He won’t know it, but his own father is to blame! It seems Nick is a lot like his old man. He’ll do whatever it takes to find Nikki while Victor Newman (Eric Braeden) does everything he can to keep Nikki safe. Kidnapping seemed like the best tactic for Victor, but that’ll cause plenty of chaos in Friday’s episode.

The Young and the Restless spoilers say Nick will clash with his sister first. Victoria Newman (Amelia Heinle) won’t be sure they should get the cops involved just yet. She might suggest there could be a logical explanation for Nikki’s disappearance, but Nick won’t buy that. After they confirm Nikki wasn’t taken elsewhere for tests, Nick will think abduction is the only thing that makes sense.

Victoria will undoubtedly worry about the evidence planter and body mover. She’ll probably think this is just the latest round of cover-up crew drama. Phyllis Summers (Gina Tognoni) will be concerned about that as well, but she’ll try to support Nick’s efforts and avoid showing her hand. Sharon will likely be brought in the loop on the horror eventually.

Soon after, one of Nick’s least favorite people will get involved. Rey Rosales (Jordi Vilasuso) is apparently assigned to any Nikki-related case, so he’ll come running after a missing person’s report is filed. It appears Rey will throw around some harsh accusations and rile Nick up even further.

Rey might suggest that Victor could’ve done this, which may not go over well with Nick. Perhaps Nick will argue that Victor would never leave his family so fearful. Of course, Y&R fans know he would and did! Victor’s the kind of guy who just does what he has to do and deals with the consequences later.

The Young and the Restless spoilers say Nick will nearly get into a brawl with Rey, but he’ll ultimately settle down. Rey and Nick will have to work together if they want to bring Nikki home. Y&R viewers won’t want to miss the twists ahead in this storyline.

Elsewhere, Kyle Abbott (Michael Mealor) may push for more info on his relationship status. Lola Rosales (Sasha Calle) rages over the price tag of his Christmas gift on Thursday and leaves Kyle wondering where they stand. Will Kyle catch up with Lola and seek clarification on Friday?

The Young and the Restless spoilers point to Kyle truly being dumped for now, so he may need some advice. He was there for Mariah Copeland (Camryn Grimes) during her recent relationship crisis, so she might be a good place to turn. We’ll give you updates as other Y&R news comes in. Stick with the CBS soap and don’t forget to check CDL often for the latest Young and the Restless spoilers, updates and news.