The Young and the Restless Spoilers: Friday, July 13 – Jill Returns to Unleash Her Wrath – Victor Vows to Finish J.T. War

BY Heather Hughes on July 11, 2018 | Comments: one comment
Related : Soap Opera, Spoiler, Television, The Young and the Restless 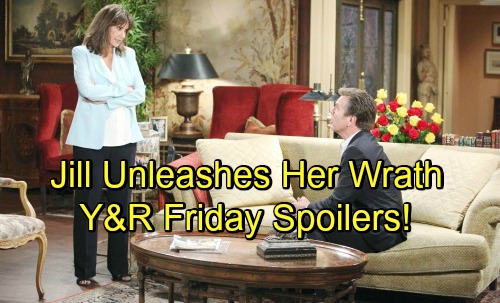 The Young and the Restless (Y&R) spoilers for Friday, July 13, tease that a big return will bring major drama. Jill (Jess Walton) will finally make her way back to Genoa City to confront those pesky non-Abbotts. Jack (Peter Bergman) and Kyle (Michael Mealor) know they aren’t blood members of their family, so they’re determined to get some answers about Jack’s biological father.

Unfortunately, this father-son duo has been hitting a few obstacles. Jill blocked the exhumation, so she won’t be happy that Kyle took matters into his own hands. When Jack opens the door, Jill will demand to know where his miscreant son is. She’ll want to rip into Kyle for disturbing the dead and making a mess in the cemetery.

The Young and the Restless spoilers say Jack will push for peace. He’ll do his best to calm Jill down and make her understand the situation. Jack won’t approve of Kyle’s sneaky move, but he’ll suggest his son was just trying to help. Besides, Jill is partly to blame for standing in the way of the truth. It wouldn’t hurt to let Jack find out if he’s really a Chancellor.

Ever since the DNA test proved he wasn’t John’s (Jerry Douglas) son, Jack’s been feeling pretty lost. He needs to solve this mystery to gain a deeper understanding of himself. Jack may get Jill to soften a bit, but she’ll still be protective of Cane’s (Daniel Goddard) spot at Chancellor Industries. She’ll side with him if Jack tries to pull anything.

Of course, Kyle scored a bone fragment during the gravedigging fiasco. Jack can now run a DNA test with or without Jill’s approval. Will the results be what Jack expects or is another paternity twist brewing? Y&R buzz hints that Jack may not be a Chancellor after all, so he may have to keep searching for his bio dad.

While we wait on paternity confirmation, we can watch Victor (Eric Braeden) get ready for trouble. J.T. (Thad Luckinbill) seemingly summons Victor on Thursday’s new Y&R episode, July 12, so “The Moustache” will prepare for war on Friday. Victoria (Amelia Heinle) will worry that Victor’s walking into a trap, but he’ll insist on facing J.T. and finishing this.