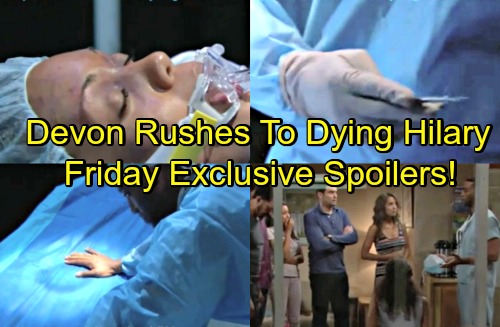 The Young and the Restless (Y&R) spoilers for Friday, July 20, tease that Devon (Bryton James) will get a shock. While he’s been off on a trip, major drama’s been going down in Genoa City. Once Devon finally makes it back to the penthouse, he’ll get a startling message from Shauna (Camryn Hamm) and rush to the hospital. Devon won’t know exactly what he’s walking into, but he’ll definitely be worried.

Y&R fans can expect some intense, emotional scenes. Devon will learn that Hilary suffered some serious injuries in a car crash. He’ll break down in tears when he finds out she lost the baby. The Young and the Restless spoilers say Neil (Kristoff St. John) will hug Devon and try to help him cope. This is a terrible ordeal for all parties involved.

Of course, the bad news won’t end there. Devon will also hear that Hilary’s in critical condition and dying. It looks like Nate (Brooks Darnell) won’t have much hope, so Devon won’t think he should waste any more time. He’ll head to Hilary’s room to offer comfort and support. Devon will just want to be near Hilary and hold her hand during this devastating crisis.

Other Young and the Restless spoilers say Nick (Joshua Morrow) will get to work at Dark Horse. He’ll hope to make a real splash with his aptly named company. Nick’s sinister strategies will continue, which won’t exactly go over well with Sharon (Sharon Case). These two will call off their engagement pretty soon, so Nick’s dirty tactics will cost him.

As for the rest of the Dark Horse team, Jack (Peter Bergman) and Abby (Melissa Ordway) will provide plenty of help. They’ll do a little brainstorming and carry out some big plans. The Young and the Restless spoilers say Ashley (Eileen Davidson) will also seek an ally on Friday. Will she view Dark Horse as a threat or a potential partner?

Ashley could try to form an alliance between Dark Horse and Jabot, but Jack may resist. He doesn’t want much to do with Jabot right now. As DH’s executive consultant, he could talk Nick out of this partnership.

Ashley may have other ideas anyway. If she’s seeking more of a personal ally, Ashley might turn to Kyle (Michael Mealor). She could use his help in pushing Billy (Jason Thompson) out of power eventually.