The Young and the Restless Spoilers: Friday, July 20 Update – Devon Breaks Terrible News to Hilary – Nick and Phyllis Hook Up 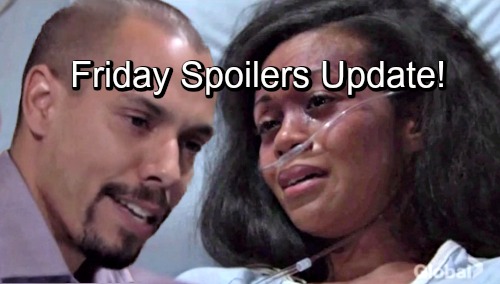 The Young and the Restless (Y&R) spoilers update for Friday, July 20, tease that Devon (Bryton James) will burst in the hospital. He’ll demand answers about Hilary (Mishael Morgan), so Neil (Kristoff St. John) and the others will fill him in. Devon will be upset about Charlie (Noah Alexander Gerry) and Shauna’s (Camryn Hamm) hookup, which set all this in motion.

When Devon mentions pressing charges against the truck driver, Charlie will suggest concentrating on Hilary right now. Nate (Brooks Darnell) will soon appear with updates. He’ll reveal that Hilary manage to survive the surgery, but she had severe hemorrhaging. Hilary obviously isn’t in good shape.

Devon will also learn that Hilary lost the baby, so he’ll face the tough task of telling her. In the ICU, Hilary will stir as Devon holds her hand. She’ll wonder what happened, so he’ll explain the car accident. Naturally, Hilary will ask about her unborn child. The Young and the Restless spoilers say Devon will break the bad news. He’ll admit their baby didn’t make it, so they’ll cry together.

Meanwhile, Phyllis (Gina Tognoni) will bump into Jack (Peter Bergman) and bring up the drama with Billy (Jason Thompson). Jack will think Phyllis should cut him some slack. Billy’s behavior was common for an addict. Thanks to Jack’s advice, Phyllis will decide to patch things up. Unfortunately, she’ll get mad all over again when she sees Billy back in the gambling suite.

Over with Nick (Joshua Morrow), he’ll realize Sharon (Sharon Case) left her engagement ring at home. Nick will search for Sharon around town, but he won’t have any luck. However, a chance encounter with Phyllis will lead to an unexpected evening.

Nick will go back to Phyllis’ apartment for some video games and drinks. He’ll bring Phyllis up to speed on his J.T. (Thad Luckinbill) plot as well as Dark Horse. Phyllis will be quite impressed by Nick’s sneakiness. She’ll think Sharon’s just used to Nick playing it safe.

Y&R spoilers say things will take a sexy turn in the kitchen. Nick and Phyllis will end up having sex on the island, but they’re sure to regret this in the morning. Elsewhere, Mariah (Camryn Grimes) and Tessa (Cait Fairbanks) will make plans for another San Francisco trip. They’ll enjoy some warm moments, but Tessa will eventually fib about being needed at work.

Later, Mariah will catch Tessa hugging some woman at The Dive Bar. She’ll look concerned as she spies them the distance. At the Abbott house, Ashley (Eileen Davidson) will have a proposal to make. She’ll want Kyle (Michael Mealor) to keep an eye on Billy and report back if he finds anything suspicious.

Kyle will wonder why he should turn on Billy, but Ash will think it’ll be worth his while. If Billy crashes and burns, Kyle could use someone like Ashley on his side. He’ll go along with her idea and start pestering Billy afterward. It looks like this alliance could produce some dangerous results!