BY Heather Hughes on May 31, 2018 | Comments: one comment
Related : Soap Opera, Spoiler, Television, The Young and the Restless 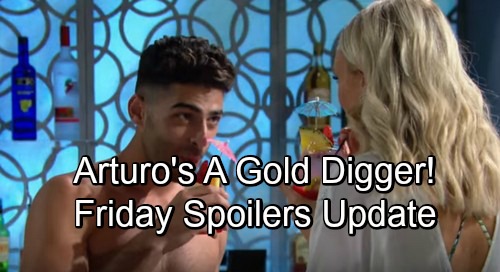 The Young and the Restless (Y&R) spoilers for Friday, June 1, tease that Mariah (Camryn Grimes) will get surprising news from Sharon (Sharon Case). Just before Mariah heads to work, Sharon will admit that Nick (Joshua Morrow) wants to move to San Diego. She’ll fill Mariah in on Nick’s job offer and suggest that Victor’s (Eric Braeden) driving Nick out of Genoa City.

Mariah won’t like the idea of being so far from her mom. Sharon will admit this isn’t the ideal situation, but she’ll note that Mariah could always come along with them. Since there seems to be more to the story, Mariah will contend that they can revisit the topic later.

In the meantime, Mariah will host with show with Hilary (Mishael Morgan). Several models will sport temporary hashtag tattoos as part of a promotional campaign. Kyle (Michael Mealor) will want to speak on camera, but Billy (Jason Thompson) won’t be interested in letting him.

Nevertheless, Kyle will hijack GC Buzz anyway for a demonstration. He’ll go for a swim to prove the product won’t smudge in water. When Kyle gets out of the pool, he’ll no longer have his swimming trunks on. This naked shocker will really spark some chaos!

The Young and the Restless spoilers say Jack (Peter Bergman) and Ashley (Eileen Davidson) will witness the spectacle on TV at home. A “technical difficulties” explanation will be put up on screen. After commenting on the disastrous launch, Jack will push Ashley to start a new company with him. She’ll turn him down thanks to lingering trust issues.

Back with Billy, he’ll get an earful from Hilary. GC Buzz will face major drama over this scandal, but what about Jabot? Phyllis (Gina Tognoni) will note that they’re trending on social media, so maybe the controversy will turn out to be a good thing.

Elsewhere, Nikki (Melody Thomas Scott) will tell Abby (Melissa Ordway) about her fling with Arturo (Jason Canela). She’ll note that she had an arrangement with Victor (Eric Braeden), so he had someone on the side as well. An appalled Abby will struggle to wrap her head around Nikki’s updates. Nikki will confirm that she ended things with Arturo, but she’ll still have concerns.

As their chat wraps up, Nikki will imply that Arturo might be a gold digger. She’ll think Abby should stay on guard. When Arturo calls Abby a little later, she’ll ignore it. As for Nikki, she’ll have another crisis to deal with. After getting a hint from Mariah, Nikki will march over to the cottage. Sharon will offer the scoop on the San Diego move, so Nikki will assume this is about J.T. (Thad Luckinbill).

However, Sharon will note that Nick’s the one who suggested it. When Nikki pushes for details, Sharon will snarl that she should talk to Victor. Nikki will realize her devious husband’s up to something again. Y&R fans can watch Nikki rip into Victor soon enough!

We’ve got some serious HOTNESS coming your way next week on #YR! pic.twitter.com/LWjksFm01G