The Young and the Restless Spoilers: Friday, June 15 – Tense Father’s Day for the Newmans – Jack Makes a Startling Discovery 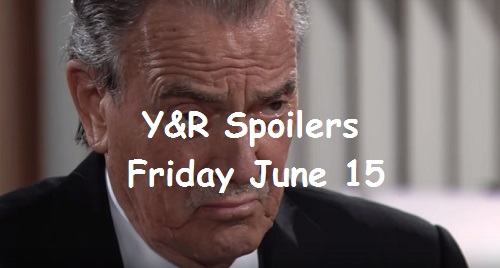 The Young and the Restless (Y&R) spoilers for Friday, June 15, tease that it’ll be Father’s Day in Genoa City. Naturally, it’ll be a very awkward holiday for the Newman clan. Nick (Joshua Morrow) won’t even want to look at Victor (Eric Braeden), but he may put up with him for the sake of seeing Christian (Jude and Ozzy McGuigen). He deserves a chance to bond with his boy.

Perhaps Nikki (Melody Thomas Scott) or Sharon (Sharon Case) will make this gathering happen. It’s a terrible idea to put Victor and Nick in the same room right now, but it’ll bring great drama. Y&R fans always appreciate that! Nick will continue to fume over Victor’s dirty tricks, but he’ll be cooking up his own soon. The Young and the Restless spoilers state that Nick means business this time!

Meanwhile, Hilary (Mishael Morgan) will believe her dreams are coming true. She’s pregnant with Devon’s (Bryton James) baby, which is wonderful news by itself. However, Hilary is also reeling Devon in romantically. After heading upstairs to make love on Thursday’s episode, they’ll delight in the steaminess and share a deep conversation on Friday.

The Young and the Restless spoilers say Devon and Hilary will talk about their plans for the future. They’ll confirm that they both want this reunion. Y&R viewers will even see a little celebration. Hilary might come up with a fun Father’s Day surprise. Devon isn’t a dad yet, but Hilary expects him to be by this time next year.

Alas, tragedy will strike soon enough. “Hevon” supporters should enjoy this bliss while they still can! Across town, Jack (Peter Bergman) will focus on his mission. Losing his blood Abbott ties put him in limbo. Jack doesn’t really feel like an Abbott anymore, but he doesn’t feel like anything else either. He’ll keep hoping he can learn who his biological father is and get a better grip on himself.

The Young and the Restless spoilers say Jack will make progress on Friday. He’ll discover something shocking, so what’s this about? Will Jack find the missing diary pages or another big clue instead? We’ll give you updates as other Y&R details emerge. Stay tuned to the CBS soap and don’t forget to check CDL often for the latest Young and the Restless spoilers, updates, and news.