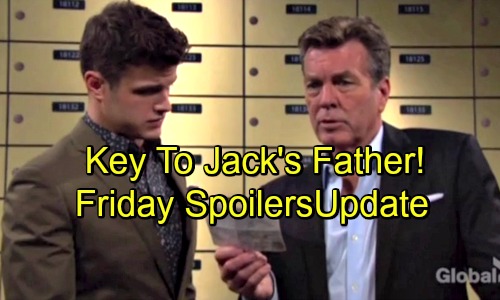 The Young and the Restless (Y&R) spoilers update for Friday, June 15, tease that Faith (Alyvia Alyn Lind) will get some disturbing news. She’s in for a shock when she hears about Victor’s (Eric Braeden) ruthless move. After wishing Nick (Joshua Morrow) a happy Father’s Day, Faith will get updates on Christian (Jude and Ozzy McGuigen). Nick and Sharon (Sharon Case) will try to explain as best as they can.

Faith will learn that Christian is Adam’s (Justin Hartley) biological son. She’ll be appalled that Grandpa would take Christian away from his home. Faith will declare that Victor’s wrong and offer Nick a Father’s Day keychain for comfort. She’ll still think he’s the number one dad.

Meanwhile, Arturo (Jason Canela) will strut in the athletic club with Abby (Melissa Ordway). The sight of them together won’t please Victor. Nevertheless, Arturo will feel like it’s time to have an honest chat. He’ll pull Victor aside and insist that he won’t be scared off. Victor will make it clear that if Arturo hurts Abby in any way, the outcome won’t be pretty.

Arturo and Victor will seemingly reach an understanding, so Abby will hope the drama dies down. Of course, there’ll still be plenty of drama between Nick and Victor! When Nick walks in with Sharon and Faith, Christian’s nanny will hand him over. Nick will spend a few moments with the boy and fill Victoria (Amelia Heinle) in on the custody situation.

Faith will want to leave, so Nick will bid Christian farewell. He’ll note that they’ll be together again soon, but Victor will doubt it. Across town, Hilary (Mishael Morgan) and Devon (Bryton James) will discuss their night of passion. They’ll eventually head over to Neil’s (Kristoff St. John) place, where he’ll be gathered with Cane (Daniel Goddard), Lily (Christel Khalil) and the twins.

The Young and the Restless spoilers say Devon will have a big announcement to make. After he reveals that he’s officially reunited with Hilary, they’ll both brace for backlash. Surprisingly, Hilary and Devon won’t get objections. Neil will insist that he’s glad that they’re getting back together. He’ll undoubtedly think it’ll work out well for the baby.

Cane and Lily will also be fine with the reunion, so Hilary and Devon won’t have to face conflict. Meanwhile, Charlie (Noah Alexander Gerry) will tiptoe across the hall for a make-out session with Shauna (Camryn Hamm). After Lily interrupts, she’ll warn that she’ll be keeping an eye on them. It sounds like the teens will have to be sneakier next time!

Other Y&R spoilers say Kyle (Michael Mealor) will share a tender moment with Jack (Peter Bergman). He’ll spread some Father’s Day love and talk about Dina (Marla Adams). Jack will learn that Dina made a card for her dad. He’ll read it and discover some abandonment issues that Dina dealt with. It’ll help Jack make sense of her behavior as an adult.

Afterward, Kyle will vow to help Jack find his father. The Young and the Restless spoilers say Jack will rummage through Dina’s belongings, but she’ll walk in and scold him. Once Dina shoos Jack away, he’ll tell Kyle that he didn’t find the missing diary pages. However, he’ll show off a key to a safe deposit box. Jack will think this could be his ticket to knowledge.

Y&R fans won’t want to miss the huge clues ahead. We’ll keep you posted as other details emerge. Stick with the CBS soap and don’t forget to check CDL often for the latest Young and the Restless spoilers, updates, and news.