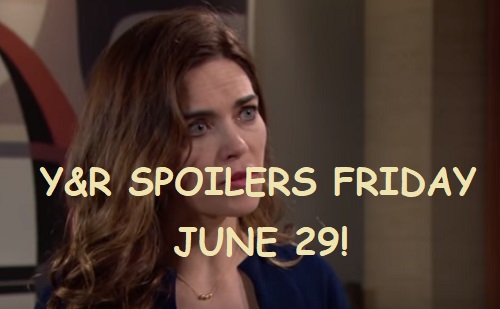 The Young and the Restless (Y&R) spoilers for Friday, June 29, tease that Nick (Joshua Morrow) and Sharon (Sharon Case) will concentrate on a new plan. They’ll put their heads together and move forward with it soon enough. We know this involves fighting for Christian (Jude and Ozzy McGuigen), so going after Victor’s (Eric Braeden) part of the deal. There’s just no other way to get what they want.

In Thursday’s episode, Victor goes public with an interview on Hilary’s (Mishael Morgan) show. It quickly turns into a PR nightmare. Victor’s lack of focus and shaky hands are bound to make him look unwell. On Friday, everyone should be buzzing about how the health expose was true. This may be the perfect time for Sharon and Nick to strike. They need to get cutthroat if they want Christian back.

Nick might urge Brittany (Lauren Woodland) to file something that could grant him emergency custody. It’s clear that Victor isn’t capable of caring for a small child. Whatever Nick decides, Sharon will back him up every step of the way. However, she should have another problem to deal with soon enough.

The Young and the Restless spoilers say another J.T. (Thad Luckinbill) sighting is looming. This one could hit way too close to home for Victoria (Amelia Heinle)! In fact, a man who resembles J.T. will appear right outside her house. This shocker may play out on Friday or Y&R could hold off until next week. Either way, Victoria’s world will be turned upside down as she battles intense fear.

Sharon and Nikki (Melody Thomas Scott) will spot J.T. or at least his lookalike from the window. Phyllis (Gina Tognoni) should join the chaos as well. Is J.T. really back from the dead somehow? Could this be an evil twin situation? Regardless, The Young and the Restless fans will be eager to see all the drama.

It sounds like things are heating up in Genoa City, so don’t miss the action on Friday and beyond. We’ll give you updates as other Y&R news comes in. Stay tuned to the CBS soap and don’t forget to check CDL often for the latest Young and the Restless spoilers, updates, and news.