BY Heather Hughes on June 28, 2018 | Comments: one comment
Related : Soap Opera, Spoiler, Television, The Young and the Restless 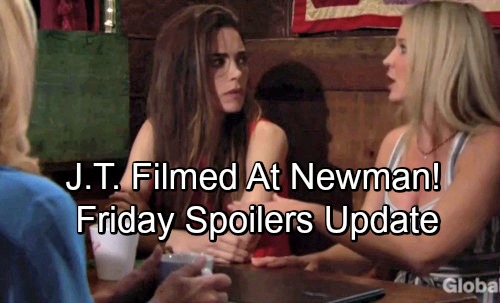 The Young and the Restless (Y&R) spoilers for Friday, June 29, tease that Victor (Eric Braeden) will face more doubts about his health. He’ll once again reassure Nikki (Melody Thomas Scott) after that disastrous interview. Suddenly, Victor’s phone will get an alert. He’ll believe J.T.’s (Thad Luckinbill) dropped another bomb. This time news will spread about Newman’s gender pay discrepancies.

A worried Victoria (Amelia Heinle) will stop by Nick (Joshua Morrow) and Sharon’s (Sharon Case) place. After she reveals the latest development, Nick will fear that Victoria’s dealing with too much stress. Y&R spoilers state that Sharon will also be on edge. A social worker visit is coming up, so she’ll just want to say and do the right thing.

Sharon will feel like she’ll struggle to prove herself, but Nick and Victoria will give her a pep talk. Once Victoria’s gone, Sharon will receive an urgent text from Nikki. She’ll fib about it being work-related and head to Crimson Lights. Nikki, Phyllis (Gina Tognoni) and Victoria will all meet up with Sharon there.

The Young and the Restless spoilers say the cover-up crew will discuss J.T. Could he really still be alive? Phyllis will dismiss the idea, but Sharon won’t think they can be certain. As they gang bickers, Victoria will decide she’s had enough. She’ll shout at everyone to stop talking and push for an end to the paranoia.

A message from Victor will derail their meeting. Newman Enterprises recently had some damaged machinery, so Victor requested security footage from that site. Victoria will reveal her father’s mission, so Phyllis will hope this halts all the J.T. talk. After a press conference at Newman, the security footage will arrive. Nikki and Victoria will be stunned see J.T. – or at least his lookalike – on the screen.

Back with Nick and Sharon, they’ll make passionate speeches to the social worker. The Young and the Restless spoilers say Sharon’s bipolar disorder will come up in the conversation. She’ll insist that she’s doing just fine with meds and support. Nick will back Sharon up, so they’ll feel good about their chances in this custody fight.

Meanwhile, Summer (Hunter King) will have several run-ins with Billy (Jason Thompson). He’ll ask if she’s following him and they’ll do some mild bickering. Later, Billy will bring up all the flirting and gambling drama. He’ll just want it to stop, so they’ll have a tense chat. Summer will eventually ask Billy to be her friend. They’ll agree to a new beginning, so Billy will feel hopeful about things settling down.

At home, Phyllis will search for a missing earring on the floor. Billy will freak briefly, but Summer will snatch up the stray poker chip. Once they’re alone, Summer will tell Billy that she’s got his back. More trouble seems to be brewing for “Philly,” so we’ll give you updates as other details emerge. Stick with Y&R and don’t forget to check CDL often for the latest Young and the Restless spoilers, updates, and news.