The Young and the Restless Spoilers: Friday, May 11 – Nikki’s Past Comes Back to Haunt Her – Jack’s Dina Move – Lily’s Shocker

BY Heather Hughes on May 9, 2018 | Comments: one comment
Related : Soap Opera, Spoiler, Television, The Young and the Restless 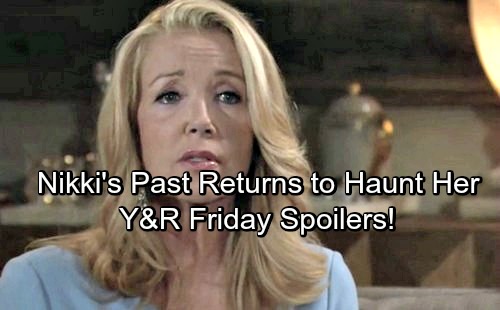 The Young and the Restless (Y&R) spoilers for Friday, May 11, tease that Nikki (Melody Thomas Scott) will get hit with an unpleasant reminder of her history. She’ll face some sort of painful blow that makes her recall old mistakes. Nevertheless, Nikki will have to tackle the drama and find a way to focus on the future.

Could this have something to do with Victor’s (Eric Braeden) manipulation? If Nikki hears about Jack’s (Peter Bergman) suffering and assumes Victor’s to blame, she could realize she’s signed on for the same ol’ scheming. Nikki may recall dozens of other incidents like this and sigh over what she can’t change.

Then again, this could be something a bit more personal. Perhaps Nikki will be reminded of other killings and cover-ups in her past. That could tie in with the current J.T. (Thad Luckinbell) aftermath. Whatever the case, Nikki will do her best to push through her discomfort and move on.

Meanwhile, Jack will have to suck it up and give Dina (Marla Adams) what she needs. He was furious over Dina’s secret and the awful revelation in that theater. However, Dina isn’t the same woman she was decades ago. She’s made amends with her family and doesn’t know much on any given day anyway. It’s cruel for Jack to hurt his elderly mother with dementia, so he’ll decide to go easy on Dina.

The Young and the Restless spoilers say Jack will reach out and make a plea for peace. Dina may not even remember what happened at this point. Regardless, Jack won’t want Dina to think he hates her. He’ll assure his mom that they’re still on solid ground, so at least Jack’s settling down a little.

Other Y&R spoilers state that Lily (Christel Khalil) will deliver a shocker. She’ll spring something on Cane (Daniel Goddard), so it should be fun to see his reaction. Will Lily plan a romantic surprise or could she stun him by softening toward Hilary (Mishael Morgan)? Either way, Cane will have a lot to wrap his head around.