The Young and the Restless Spoilers: Friday, May 25 – Jack and Billy Brawl – Abby’s Bold Move – Devon and Hilary Get Steamy

BY Marcy Cohen on May 23, 2018 | Comments: Leave Comments
Related : Soap Opera, Spoiler, Television, The Young and the Restless 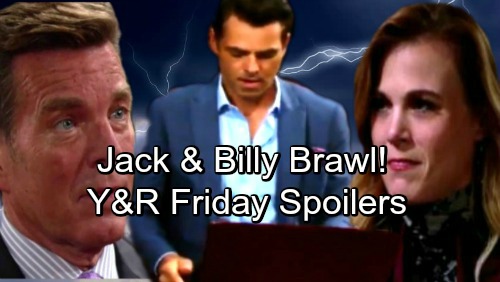 The Young and the Restless (Y&R) spoilers for Friday, May 25, tease that Abby (Melissa Ordway) will make a bold move. She’ll do something courageous and hope the risk is worth it. There’s a possibility this is about all the changes at Newman. Abby might do something that could give her an advantage over Victoria (Amelia Heinle) and Nick (Joshua Morrow).

However, Abby seems a bit more wrapped up with Arturo (Jason Canela) at the moment. We’d say her risk will probably involve him. Perhaps it’s time to take a chance on love! Abby offered to be Arturo’s plus one at the fundraiser, but he had only RSVP’d for himself. He hated to ask Nikki (Melody Thomas Scott) for special treatment under the circumstances, so he decided to attend the event alone.

Of course, Abby might seek out an invite herself or even just crash the gathering. If so, will Arturo be uncomfortable or pleasantly surprised? Abby would certainly hope for the latter! Meanwhile, Jack (Peter Bergman) and Billy’s (Jason Thompson) war will spiral out of control. The Young and the Restless spoilers say this situation will get ugly, which usually means punches will be thrown.

It sounds like Billy and Jack are about to have a serious Y&R brawl. If they make a public scene, Ashley (Eileen Davidson) will secretly be pleased. This would definitely help with her efforts to score the CEO spot. If Jack and Billy prove they’re idiots, it could clear at easy path for Ashley’s rise to the throne.

Elsewhere, Devon (Bryton James) and Hilary (Mishael Morgan) will feel a familiar spark. They’ve been growing closer lately, so maybe it’s time to get physical. Devon might pull Hilary into a kiss or even beckon her to the bedroom for love-making. It wouldn’t hurt to give themselves an extra shot at creating a kid.

Whatever the case, Hilary and Devon will have a hard time resisting each other. The Young and the Restless spoilers say they might as well cave in and let this happen. A reunion is inevitable at this point. We’ll give you updates as other Y&R news comes in. Stay tuned to the CBS soap and don’t forget to check CDL often for the latest Young and the Restless spoilers, updates, and news.