BY Marcy Cohen on May 2, 2018 | Comments: one comment
Related : Soap Opera, Spoiler, Television, The Young and the Restless 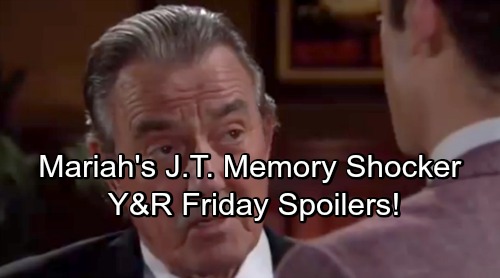 The Young and the Restless (Y&R) spoilers for Friday, May 4, tease that Victor (Eric Braeden) will challenge Kyle (Michael Mealor). Thursday’s episode brings a hint about Kyle’s weapon against Jack (Peter Bergman). He insists he’s got serious ammunition, so Victor wants to hear all about it.

However, it seems Kyle will want to keep the news to himself on Friday’s new Y&R episode. He may plan to see how things play out before he unleashes it. Of course, Victor will wonder if Kyle even has anything significant. He’ll suggest that Kyle’s just trying to make himself look like a big shot. Victor will argue that if Kyle really had ammo, he’d give his ally updates.

It sounds like Victor will try to goad Kyle into blabbing. Vic is a master manipulator, so he knows all sorts of intimidation tactics. He’ll do whatever he can to learn what Kyle’s hiding, but will he succeed? Let’s hope Kyle knows better than to share a secret this huge! Jack’s paternity could make major waves in Genoa City, so Kyle needs to protect both his father and himself.

Other Young and the Restless spoilers say a significant memory will return for Mariah (Camryn Grimes). As she thinks back to the night of the party, Mariah will recall something that doesn’t quite add up. Her memory won’t be in line with what she thought occurred that evening, so this could bring more drama for Sharon (Sharon Case). Mariah will inevitably start asking questions soon.

Unfortunately, Sharon already has Nick (Joshua Morrow) on her back. He can tell that she’s troubled, so he’ll once again push her to open up on Friday. Y&R fans can expect Sharon to be backed into a corner, but she’ll try to worm her way out of it. Sharon will manage to keep the cover-up gang’s secret, but Nick won’t let go of his mission to find J.T. (Thad Luckinbell).