The Young and the Restless Spoilers: Friday, November 30 – Phyllis Hides the Truth from Nick – Billy and Kyle’s Nasty Takedown Plot 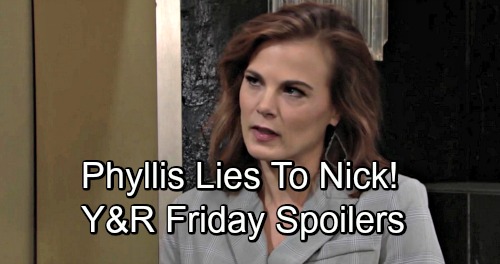 The Young and the Restless (Y&R) spoilers for Friday, November 30, tease that more Jabot drama’s ahead. When Phyllis (Gina Tognoni) scored the CEO spot, plenty of employees weren’t too happy about it. Billy (Jason Thompson) and Kyle (Michael Mealor) were at the top of the list!

That’s why they’re on a mission to get Phyllis off the throne as soon as possible. Billy feels a smidge guilty over how he handled things with Summer (Hunter King), so he doesn’t want to play too dirty. Sleeping with Phyllis’ daughter was pretty much the lowest blow he could deliver, which means Billy isn’t keen on trying to outdo himself.

Nevertheless, Billy wants Phyllis out and intends to make it happen. Y&R fans know Kyle has no problem sinking as low as it takes, so could he push Billy down a darker path than he anticipated? Now that Phyllis has moved in with Nick (Joshua Morrow), Billy’s rage could start rising again.

Victoria (Amelia Heinle) thinks maybe Billy’s matured lately, but that doesn’t mean he’ll go easy on his ex. With Kyle egging Billy on, they just might become a powerful force to be reckoned with. The Young and the Restless spoilers say this team will do some plotting in Friday’s episode. Kyle and Billy will hope to come up with a solid takedown plan, so stay tuned for major drama.

Meanwhile, Phyllis will worry about a different threat. She’ll keep Nick out of the loop on a big secret, but what will it be? Phyllis has been hiding the girls’ night fiasco for months, so this sounds like something new. It could be related to Sharon (Sharon Case) if she does something Phyllis would leave Nick in the dark on.

Then again, it could involve Tessa (Cait Fairbanks) and the surveillance footage. Tessa lost her barista job, but the ladies can’t exactly blab to Nick and get her fired from Dark Horse. If Tessa’s name comes up in a casual conversation, that could lead to Phyllis playing dumb or bending the truth.

Whatever the case, Phyllis will keep something else from the new man in her life. It’s not a great way to start off this renewed “Phick” relationship. Finally, Devon (Bryton James) will get busted with drugs. Cane (Daniel Goddard) will find a baggie containing some and wonder what Devon thinks he’s doing. He’ll be desperate to talk some sense into Devon and put him on a better path.