BY Heather Hughes on October 25, 2018 | Comments: one comment
Related : Soap Opera, Spoiler, Television, The Young and the Restless 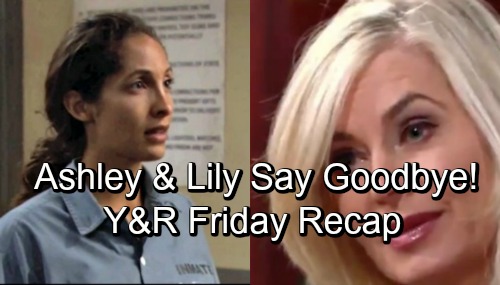 The Young and the Restless (Y&R) spoilers update and recap for Friday, October 26, tease that Lily’s transfer will move forward. Her new correctional facility is four hours away, so she won’t be able to see her family as often. Cane (Daniel Goddard) will hope there’s some way to fight this. Devon (Bryton James) will pitch in by seeking a favor from a senator. He’ll want Lily’s sentence to be reduced, but he won’t get his wish.

Once Mattie (Lexie Stevenson) and Charlie (Noah Alexander Gerry) get updates, they’ll demand to see their mother. At the prison, Lily will explain the situation and promise she’ll be safer this way. The Ashby family will come together for an emotional goodbye before Lily heads off.

Meanwhile, Ashley (Eileen Davidson) will have a tender chat with her mom. She’ll reflect on how she felt snubbed by Dina (Marla Adams) in the past. Ashley never felt as loved as Jack (Peter Bergman), but Dina will promise she loved all her children a great deal. Thanks to this newly discovered contract, Ashley will be sure of that. She’ll be grateful that Dina was willing to watch out for her.

Over with Jack and Billy (Jason Thompson), they’ll discuss Ashley’s CEO demands. Jack will refuse to let his sister take control again. He’ll feel like they’ll just have to handle this another way. Afterward, Traci (Beth Maitland) will join the conversation. Kyle (Michael Mealor) and Abby (Melissa Ordway) will weigh in as well.

Y&R spoilers say Abby will fight for her mom. She’ll insist they should put Ashley back on the throne, but Traci will disagree. Their family is crumbling, so she won’t think any Abbott should be running Jabot right now. Later, Jack will offer Ashley a raise and a different path. He’ll think she should run R&D – all while keeping the rights to the patents she was promised.

Ashley will scoff at Jack’s attempt to pay her off. In the midst of all the Abbott feuding, we’ll see more flashbacks. There’ll be moments where John clearly doted on Ashley after Dina left. Jack was in pain, but John wanted him to man up and be there for his sisters.

Back in the present, Jack will regret not supporting Ashley like he should have. The whole family will assure Ashley that she’s loved and valued. After some speeches, Ashley will leave to mull over everything over. While she’s gone, Jack will talk to Traci about how he had to be the strong one when they were younger. He’ll hate that it somehow turned into making Ashley the weak one.

The Young and the Restless spoilers say Ashley will make a big decision about her future. She’ll announce that she has to turn down Jack’s offer. Ashley just won’t think she can stick around and work under anybody. She’ll reveal that she’s taking her patents and leaving Genoa City – as well as her family.

Ashley’s last episode is coming up on Monday’s new episode, October 29, so things are already winding down. Will you be sad to see Ashley go? We’ll keep you posted as other Young and the Restless news comes in. Stay tuned to Y&R and don’t forget to check CDL often for the latest Young and the Restless spoilers, updates and news.