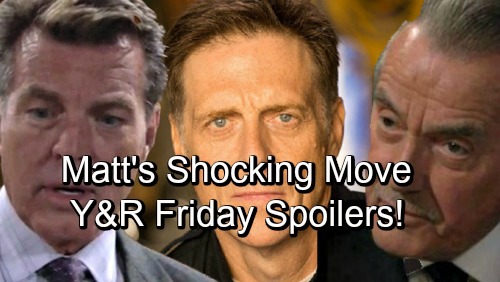 The Young and the Restless (Y&R) spoilers for Friday, September 21, tease that Traci (Beth Maitland) will head home for a visit. Y&R fans always love when this familiar face comes back to town. Unfortunately, Traci should get caught in a family crisis or two. The Abbott clan is falling apart, so Traci may be left to pick up the pieces.

For starters, Ashley’s (Eileen Davidson) wrestling with a huge decision. Kyle’s (Michael Mealor) pushing her to use the evidence and take Billy (Jason Thompson) down for embezzlement. Ash isn’t keen on hurting her brother like that, but she also knows Billy’s spiraling. Could this be the only way to stop the destruction? Maybe Ashley will get some advice from Traci soon enough.

Of course, Jack’s (Peter Bergman) dealing with some drama as well. He believes he may be Victor’s (Eric Braeden) half-sibling, but he’d like to know for sure. Jack may confide in Traci at some point on this journey. He could undoubtedly use some support right about now.

Regardless, The Young and the Restless spoilers say Jack’s fate could be in Matt Miller’s (Richard Gleason) hands. Matt may be Jack’s only shot at learning the truth, so he’ll hope Victor’s brother is cooperative. In the meantime, Victor will contemplate a difficult choice. Will this involve Jack’s mission, too? Victor might decide to stop fighting Jack on this and just see what happens.

On next week’s new Y&R episodes, September 24-28, Jack and Victor will face a real shocker. That suggests Victor won’t manipulate the DNA results, but would Matt? The Young and the Restless spoilers say he’s got some sneaky plans, so it’s a possibility to consider. It sounds like Matt could create some tricky situations before long.

Elsewhere, secrets will continue to trouble Nick (Joshua Morrow) and Sharon (Sharon Case). Y&R viewers know Nick slept with Phyllis (Gina Tognoni), but he’s keeping that tidbit under wraps. Sharon is staying silent about J.T.’s (Thad Luckinbill) death and the cover-up that followed. As their nuptials draw near, Nick and Sharon will definitely have concerns about what they’re concealing.

Will the guilt become too much to bear or will “Shick” keep their bombshells hidden for now? The latter seems likely since it could lead to a major wedding blowup! We’ll give you updates as other Y&R news comes in. Stick with the CBS soap and don’t forget to check CDL often for the latest Young and the Restless spoilers, updates, and news.