The Young and the Restless Spoilers: Has Adam Newman Been Hiding In Canada – Epic Y&R Comeback Planned?

BY Sean O'Brien on July 21, 2018 | Comments: one comment
Related : Soap Opera, Spoiler, Television, The Young and the Restless 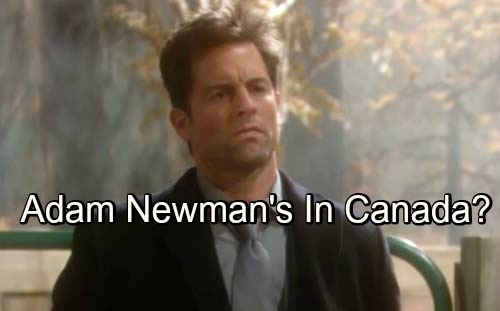 The Young and the Restless spoilers tease that Adam (most recently played by Justin Hartley) is not dead, but has been living in Canada for awhile. Nick (Joshua Morrow) will share details of the J.T. (Thad Luckinbill) ruse with his undead brother in the near future, aiding one of the greatest comeback stories in daytime history.

It is fully understandable that readers of this series of speculative Adam features would wonder why this one is any different than the others. Well, Michael Muhney recently told his social media followers, which collectively number over one-hundred thousand souls, “Fantastic things coming. Patience. Enjoy the ride.”

Oh, why has Adam been living in Canada? Well, that country was far enough away from Genoa City to allow the believed-to-be-dead Newman to take stock of his life and revert to form. Soapy magic could easily allow the image of Adam that was seen from 2009 through early 2014 to reappear. Y&R could include the revert in its epic comeback, or simply ask the audience to suspend disbelief and move on.

Holding residence in Canada, Adam recovered from the injuries suffered in the cabin blast. His face was damaged, again, which explains why Victor’s (Eric Braeden) freelance investigative staff wasn’t able to find his second-born son.

Chloe’s (Elizabeth Hendrickson) grief-driven actions, as facilitated by Victor, caused her to go off on Adam in a way that was never expected. She believed her nemesis to be dead, but this particular soap character is indelible, infinite and therefore indestructible.

Adam was about to return to Wisconsin and made contact with Chelsea (Melissa Claire Egan). He wanted to be with his first-born son, Connor (Gunner and Ryder Gadbois), but was persuaded to stay hidden. That hidden element of Chelsea’s departure story will be addressed upon her return to GC as well.

Chadam’s coming reunification plays into Egan having told her followers, upon her recent amicable departure from Y&R, that Chelsea’s story wasn’t over. Y&R has the ability to bring back Adam, or Adam and Chelsea whenever it so desires, which assumes that the named actors would rejoin the cast, or recast(s) would allow that to happen in either regard, or both. Though hardcore supporters surely are hoping that Muhney and Egan pick up where they left off more than four years ago.

So, the latest portion of the elongated, complex Christian paternity storyline flows forward. It’s natural, fitting, final climax can only happen when his dad, Adam, comes back. And so he must. CDL is a leading source for everything linked to The Young and the Restless. Check back regularly for Y&R spoilers and news!