The Young and the Restless Spoilers: Hevon, Philly, and Abturo Relationships Tested – The Summer of Summer

BY Sean O'Brien on June 12, 2018 | Comments: one comment
Related : Soap Opera, Spoiler, Television, The Young and the Restless 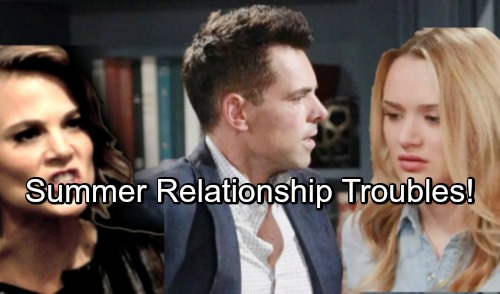 The Young and the Restless spoilers tease that three couples are having their relationships tested as summer heats up. Hevon, Philly, and Abturo will each face threats to their pairings shortly. Hevon will initially be pressed regarding Hilary’s (Mishael Morgan) desire to have Shauna (Camryn Hamm) live with them. However, as readers of this comprehensive entertainment site recently learned, Morgan has opted to exit the show. So, Hilary will be leaving Genoa City, or will be recast within the next few months.

It’s taken Y&R over a year to write Hilary and Devon (Bryton James) back together. The slow build was almost assuredly written with the thought that Morgan would remain part of the cast. However, contract negotiations apparently broke down and now various options have opened regarding this major character.

Hevon’s amicable parting in January 2017 allowed Hevon’s redux to be playing out now. Possibly the same will prove true with Morgan and she will only be gone for awhile instead of forever? With whatever proves true, Hilary will either be written out of GC, seemingly killed off, or recast. Thus, coming drama appears likely for Hevon later this summer, or in the early fall.

Philly is solid. Well, it was until Summer (Hunter King) arrived. Now she’s flaunting her appealing presence to Billy (Jason Thompson), which could easily spark trouble.

King’s return to her daytime home quickly injected tumult into this fictional Wisconsin town. Kyle (Michael Mealor) hasn’t been quiet about his desire to keep his distance from this particular ex-girlfriend. Soon, Phyllis (Gina Tognoni) may want to do that as well if Billy gives in to Summer’s overtures, or is setup to look as though he’s doing so. Will the mashup be Silly or Bummer?

Abturo is a play on words and a mashed up nickname for Abby (Melissa Ordway) and Arturo (Jason Canela). Ab stands for the first part of Abby’s name and relates to Arturo’s abs, which many women have noticed.

Abby has a checkered relationship history, with her only true accomplishment having been Stabby (meaning Stitch, Sean Carrigan, and herself.) Their marriage ended when Abby suddenly decided that she never loved Ben. Y&R fans knew that actually meant Carrigan was being written out and thus Stabby needed to split.

While it seemed unlikely, Arturo actually fell for Nikki (Melody Thomas Scott) during their short-lived dalliance. He’s moved onto Abby since, but could be kissed back to Mrs. Newman depending upon Victor’s (Eric Braeden) next mood swing. But Nikki is only one threat, as Abby will need to keep her eye on Arturo who is clearly a ladies’ man.

This trio of couples will endure various soapy dilemmas in what should be a hot GC summer. Which duo’s survive, if any, will prove intriguing. CDL is a leading source for everything linked to The Young and the Restless. Check back regularly for Y&R spoilers and news!