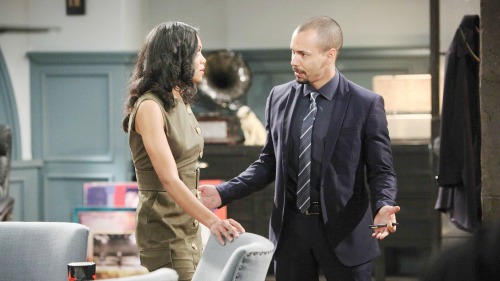 The Young and the Restless spoilers tease that Hilary (Mishael Morgan) and Devon’s (Bryton James) litigious plan to have a baby has produced an unexpected consequence. Devon doesn’t seem to realize it yet, but Hilary is slowly but surely regaining the upperhand in this relationship, if it can be labeled that yet.

Hevon’s break early last year was amicable. Devon pushed for it, but the ending genuinely wasn’t bitter. Savvy fans, as well as all who are experienced in romantic relationships knew that the seeds of a reunion were left within the hearts of both characters at that time. The teased reunion that appears to be taking place early this year merely fulfills that promise.

Devon understandably decided that he could no longer live with Hilary and wanted a divorce. Mrs. Hamilton agreed that their chemistry wasn’t enough to prevent what had become a dysfunctional marriage from continuing.

Interestingly, the former spouses didn’t find matches in their initial second choices. Devon built his friendship with Mariah (Camryn Grimes) into an honest attempt at more. Grimes’ character realized he wasn’t who she wanted and Mevon was no more.

Hilary glamed onto Jordan (Darnell Kirkwood). While their attraction was real, the substance each desired didn’t exist. As with other past connections, Hilary broke that link badly.

Simone (Shanica Knowles) is a legitimate threat to Hilary right now. Devon sincerely likes her and is attempting to further matters with this newly created character. However, fans can see that no one gets to Devon like Hilary has and still does. That factor made Devon agree to the baby plan, which made no logical sense.

While Hilary hasn’t held power over Devon since their marriage ended, if she does eventually bear his child, all that was will be again. Hevon Part II may not mirror its original incarnation, but there’s little doubt that Hilary will reclaim her role as the pants-wearer.

Devon is skeptical that Hilary’s pregnancy result is real. He and the audience will soon know if Miss Curtis is carrying his child. Viewers would tend to think that is true, as further attempts to procreate have been called off by Mr. Hamilton. Y&R spoilers published by CDL indicate that by week’s end we will learn that Hilary is NOT pregnant!

The idea of Y&R without Hevon Part II seems unlikely, as James and Morgan easily rank with the most electric pairings in the cast. Genoa City is certainly more interesting when Devon and Hilary, oops, Hilary and Devon are entangled. But if there is to be a next time around the writing staff must develop a new angle. Ah, that’s how their baby will prove crucial.