The Young and the Restless Spoilers: Hilary Uses Kyle to Attract Devon’s Attention Away From Simone 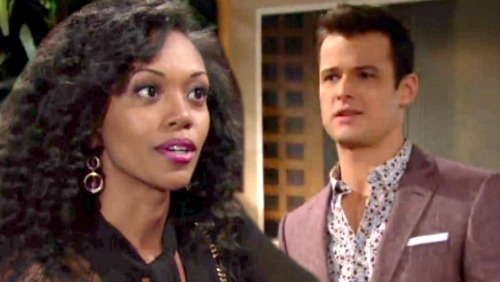 The Young and the Restless spoilers tease that Hilary (Mishael Morgan) will use Kyle (Michael Mealor) for a purpose. Lily’s (Christel Khalil) move, which pushed Simone (Shanica Knowles) into Devon’s (Bryton James) path, shall be counterbalanced.

Lily realized that Devon wasn’t going to listen to her about Hilary. He decided, foolishly in the minds of anti-Hevon fans, to have a baby with his ex-wife. Despite Lily’s pleas, Devon convinced himself that Hilary was the ideal woman to give birth to his first child.

Hilary initially explored artificial insemination through a donor pool, but was put-off by available options. That effort made the former Mrs. Hamilton realize that Devon was the perfect choice to lead her science project.

Lane attempted to block Hilary’s attempts to become inseminated with Devon’s swimmer’s. But that move boomeranged when Devon told Hilary that they would make a baby the old fashioned way. Things went so well one night that he told Hilary they should continue trying the next day, to which she readily accepted.

Lily was stunned to learn that her intent backfired. Devon told her as much, but also didn’t like that Hilary blabbed about what happened.

In an effort to work another angle, Lily called Simone. She’s a hot new singer that Devon signed to the Hamilton Winters Group’s LP streaming label.

Mrs. Ashby, who’s become the mother of three children, decided to use Simone’s interest in Devon to her advantage. Lily summoned her to the office and suggested that she consider modeling, which would follow along with Devon’s corporate synergy theory. That was the ruse Lily used to push Simone and Devon together.

Devon does find Simone attractive, which Hilary realizes. So rather than allow any space to open, Hilary opted to kiss Jack’s (Peter Bergman) son. Kyle likely doesn’t know that she’s planted a few pecks on his dad’s lips in past years. She had a crush on Jack, which was never explored to any depth.

Hevon tried other people after they parted. Neither Mariah (Camryn Grimes), nor Jordan (Darnell Kirkwood) proved to be a match for Hilary or Devon in that order.

Y&R fans would think that the same scenario will play out again, meaning that Simone and Kyle will fall by the wayside in coming months. Who knows, maybe Knowles’ and Mealor’s characters will become a couple? Lily, or Hilary shouldn’t have a problem with that development, if it eventually happens.