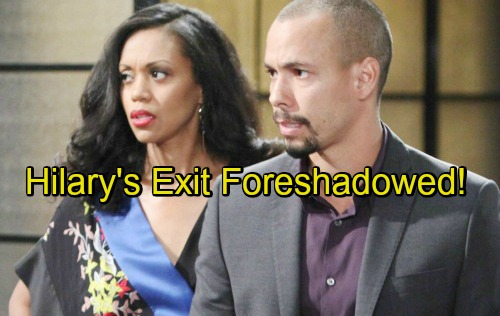 The Young and the Restless spoilers tease that Nate’s (Brooks Darnell) arrival may be the factor that splits Hevon and enables Hilary’s (Mishael Morgan) write-out. As Y&R fans know, Morgan recently announced her voluntary departure from this iconic soap.

Morgan later took to social media (on June 27) to thank the cast and crew after filming her final scenes. Based upon daytime drama’s recording schedules, which are approximately six weeks in advance, Hilary will last likely be seen in August 2018.

It hasn’t been confirmed if Y&R was writing Hilary’s storyline toward a potential Morgan exit, which then arrived. Generally something like that would be open-ended in any instance, as contract extensions, renewals, and alternative options can flow in various directions, including a brief, or extended respite.

But Morgan didn’t opt to renew her contract at whatever terms were being offered and didn’t drop to recurring status through a forced, or negotiated break. She decided to leave, seemingly parting on terms that were amicable enough to allow her to return, if both parties want that some day.

There wouldn’t seem to have been enough time to write Hilary off a cliff again, which is a wink at what happened earlier this decade when Morgan had her first child, Niam. Now, Hilary is approaching the midpoint of her pregnancy. That means Morgan won’t be around to play through Hilary’s delivery.

Based upon Hilary’s immediate interest in Nate, it’s plausible to believe that Darnell’s presence could spurn Hevon’s split, followed by Hilary’s departure. The quick-reveal, where Hilary learned that Nate’s romantic partner died a year ago feels like a setup.

Hilary increasingly falls for Nate, he responds, Devon catches them in a compromising position, and that would be that. But there’s a flaw in this easy theory. Hilary would still be pregnant with Devon’s baby if Hevon split. So then what would happen? And, why would Hilary leave town if Nate became her next rush-crush, as Jordan (Darnell Kirkwood) was?

It feels like any presented Hevon split, or shakeup would keep Hilary in the picture via a recast replacement.  So, would Y&R have Hilary lose the baby and then leave on a doubly-sad note, as she and Devon would see their love evaporate as well? Hopefully not.

With whatever plays out, it’s disappointing that Morgan has left. Her work was hands-down electric. She was easily one of the best actors, who projected one of the more dynamic characters on this show during her five-year tenure.

All the best to you, Mishael Morgan. As for Hilary, GC Buzz will break the story of its host’s future first, if there’s anything to report that’s buzzworthy. CDL is a leading source for everything linked to The Young and the Restless. Check back regularly for Y&R spoilers and news!