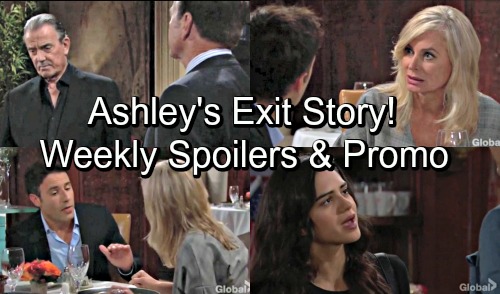 The Young and the Restless (Y&R) spoilers for the week of September 17-21 tease that several Genoa City residents will be in tight spots. For starters, Ashley (Eileen Davidson) will struggle to keep a secret. Billy’s (Jason Thompson) not the only one with something to hide around Jabot.

Ashley will meet with a man who seems surprised that they have to meet at all. He’ll feel like their little arrangement has been working out well so far. Ashley will insist on making a few changes, presumably to keep Billy out of the loop. She’s covering up some repeated charges to the company, so she won’t want the real reason for those getting out.

Ashley’s cover story could fall apart soon, so this could play a role in Eileen Davidson’s upcoming exit. Y&R fans know she’s set to exit the show before September wraps up. The Young and the Restless spoilers hint that Ashley’s departure will come with plenty of family drama, so don’t miss what’s cooking.

Of course, Billy’s got his own issues to deal with. Just as Phyllis (Gina Tognoni) feared, Billy’s losing his grip on his addiction. The Young and the Restless spoilers say Phyllis will confront Billy this week. He’ll explain some budget issues, but Phyllis will suspect this is really about Billy’s betting. She’ll worry that he’s digging a hole he won’t be able to climb out of. There’s a good chance Phyllis is right!

Kyle (Michael Mealor) will continue to pose a threat to Billy and his spot on the throne. He’ll push some limits before long, so Billy had better watch out. However, Kyle will also manage to focus on his dating life. That’s great since he’s been moping around and pining for Summer (Hunter King) lately.

Kyle can clearly do much better than “Snowflake,” Genoa City’s biggest brat. When he runs into Lola (Sasha Calle) again, they’ll do plenty of flirting. Lola will wonder if Kyle’s going to ask her out of what. That’s awfully forward of her, but Kyle won’t mind. He’ll sense that Lola’s got some special something he’s been missing. Their spark could turn into a raging flame before you know it.

Other Young and the Restless spoilers say Jack (Peter Bergman) and Victor (Eric Braeden) will have a showdown. When Jack comes looking for info, Victor will suggest that he’s butting in his family’s business. Jack will fire back that he’s seeking information on his own family.

Unfortunately, there could be some overlap! Victor and Jack certainly won’t be happy about the possibility that they’re half-brothers. Still, they’ll both want to get to the bottom of this. Y&R viewers can watch them spar as they seek the dirty details of the past.

It sounds like some hot episodes are in the works. We’ll give you updates as other Y&R news comes in. Stick with the CBS soap and don’t forget to check CDL often for the latest Young and the Restless spoilers, updates, and news.