The Young and the Restless Spoilers: Hunter King Dishes on Summer’s Future With Billy, Prison Visit and Her Y&R Status 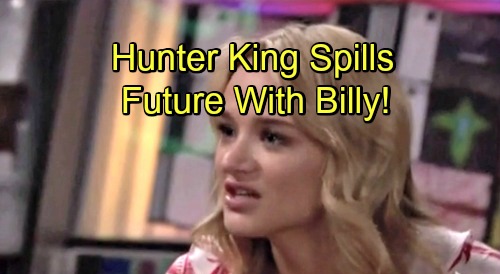 The Young and the Restless (Y&R) spoilers reveal that Summer (Hunter King) will keep fighting for what she wants. She’s desperate to have sex with Billy (Jason Thompson) and blow up her mother’s relationship, so she’ll work even harder to make it happen. Phyllis’ (Gina Tognoni) daughter has certainly made plenty of waves since she first popped back up in Genoa City!

In an interview with Soap Central, Hunter King dished on Summer’s wild streak and her hazy motives. She’s thrilled to be playing Summer as an edgier, more manipulative character. “Everyone always asks if it’s fun playing the bad girl, and it has been fun for sure, just because it is so different than what Summer was before,” King said.

Summer still tends to be a controversial character, but quite a few Y&R fans love to hate her now. She’s certainly shaking things up in town, so that’s been fun. Summer recently planted a kiss on Billy (Jason Thompson), which he didn’t reciprocate. However, a little piece of Billy might’ve enjoyed it.

How does Billy really feel about Summer? It’s tough to say and that’s part of the appeal. King praised her costar for pulling off his part in this tricky storyline. “Jason is doing a phenomenal job,” King gushed. “Even me, when I was in the scene with him, I was like, ‘I really couldn’t tell what you were feeling!’”

Of course, Summer’s feelings are difficult to decipher as well. Is she just a pot-stirrer who wants to hurt her mom or is she genuinely attracted to Billy? King suggested that she’s “still trying to figure it out.” She added that this hot plot is “very twisty and turny,” so it sounds like more bombshells are brewing.

King was also asked about Billy and Summer’s potential as a Y&R pairing, Silly, or if you prefer, Bummer. What would they be like if they became an actual couple? Could that ever work? King doesn’t think so, but she’d never rule anything out on a soap.

She teased, “Personally, I think it would be a total train wreck…it would be absolutely insane. But then again, you never know. Crazier things have happened!”

Speaking of crazy things, King mentioned that she sometimes gets fan mail from viewers behind bars. Surprisingly enough, prisons are full of soap fans. Inmates tend to watch in common areas, so King joked about getting the cast together for some visits.

Finally, King talked about her future at The Young and the Restless. She’s also on CBS’ primetime comedy, Life in Pieces, so what does that mean for her time at Y&R? As of right now, King intends on doing both. She’s hopeful that she can coordinate schedules and keep pleasing fans of each show.

King reached out to Y&R herself after she heard buzz about a Summer comeback, so she seems motivated to stick around. She made herself available so they wouldn’t recast, which could mean she’s truly invested in making this two-show thing work. It looks like Summer’s here to stay!