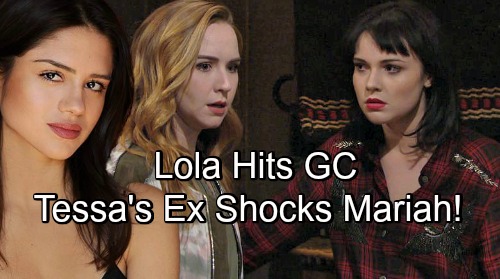 The Young and the Restless (Y&R) spoilers tease that a new character is headed to the CBS soap. Y&R recently cast Sasha Calle as Lola Rosales, so you can expect to see her in Genoa City starting September 14. Lola is Arturo (Jason Canela) and Rey’s (Jordi Vilauso) sister, which means she’ll inevitably get stuck in their feud.

However, Lola may have more than just family connections on canvas. A former flame may be in GC as well! Let’s consider the evidence. The Young and the Restless spoilers say Tessa (Cait Fairbanks) will have another secret soon. She’ll come back into town and start keeping Mariah (Camryn Grimes) out of the loop again.

Despite Mariah’s (Camryn Grimes) best efforts to trust her, she won’t be able to shake the feeling that Tessa’s hiding something – or perhaps someone. Could Lola be Tessa’s ex? That’s definitely a possibility to consider.

Back when Mariah planted that first kiss, Tessa seemed to know what she was doing. She was surprised by her bestie’s move, but she was cool as a cucumber compared to panicked Mariah. Being with a woman has never appeared to be unfamiliar territory for Tessa.

Tessa has always been cagey about her past, so Y&R can write pretty much any backstory they want. Maybe Tessa had a relationship with Lola long ago. Her tendency to keep secrets might’ve driven them apart. Tessa may fear that Lola will sabotage her new relationship somehow, which could explain her desire to keep her old romance hush-hush.

If you want proof of Tessa and Lola’s link, look no further than Sasha Calle’s Twitter account. Not many Young and the Restless cast members have followed Calle just yet, but Cait Fairbanks was quick to hit the follow button. That’s most likely an indication that Fairbanks and Calle have been filming scenes together.

Calle’s follow list offers clues, too. She naturally followed her TV brothers, but what about other Y&R stars? She followed back Fairbanks plus Camryn Grimes and Michael Mealor (Kyle). So far, that’s all. To recap, Calle’s suggesting that she’s worked with the key players in Mariah and Tessa’s story. Kyle is the “Teriah” ship captain, so he would understandably be involved here.

As one more bit of proof, we should look at an intriguing comment from a fan. “Hopefully another potential LGBT character,” said one viewer on Twitter. Calle liked the tweet, which could be another hint that Lola’s been or will be involved with Tessa. It’s worth mentioning that Calle is a singer like Fairbanks, so maybe Tessa and Lola crossed paths through their music at some point.

Will poor Mariah get her heart broken again? Can Mariah and Tessa survive “Hurricane Lola” and the damage she may cause? We’ll give you updates as other Y&R news comes in. Stay tuned to the CBS soap and don’t forget to check CDL often for the latest Young and the Restless spoilers, updates, and news.