BY Sean O'Brien on June 22, 2018 | Comments: one comment
Related : Soap Opera, Spoiler, Television, The Young and the Restless 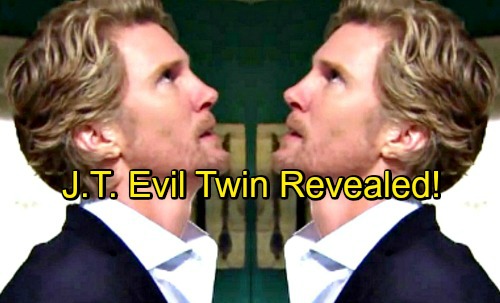 The Young and the Restless spoilers tease that Thad Luckinbill’s (J.T.) real life twin brother, Trent, could be part of the J.T. could be alive scenario that is developing. Not an evil sibling in real life, Trent Luckinbill could return to Y&R for the first time more than a decade. Yes, return because he played a character on the show before.

It would be totally ridiculous to think that Y&R would actually hire Thad’s twin brother, some might scream. Well, Trent actually appeared on the show in 2005 as an uncredited ‘guy’ character.

Yes, Trent Luckinbill is more than a producer of films, including La La Land. He also was an actor, briefly. In addition to the one-off Y&R stint, that took place five years after Thad left the cast, he also played Thomas Gaffney on Law and Order: Criminal Intent in 2011, and appeared in a handful of documentaries as himself in the mid part of this decade.

Assuming that Trent has actually returned, or is going to be used in this storyline in the near future, he could be playing J.T.’s unknown evil twin brother, or a soapy doppelganger.

Adjusting this conjecture, let’s assume that J.T.’s look-a-like was actually the guy who returned to Genoa City late last year. That would make more sense then choosing to believe that mild job disappointments served to slowly turn J.T. into a one-dimensional, stereotyped modern male character who can never be redeemed. (Could those who work in Hollywoodland, the mass media, including social media, and cheer those efforts among the public be more warped in their thinking? No.)

Regarding the paragraph above, if true, then Thad could return to fill his J.T. role, since he hypothetically wouldn’t have been playing him recently. But if J.T. was intentionally written off the rails, as was presented to the audience, then it becomes plausible to think that the evil twin came to learn of his brother’s death and is seeking revenge.

While they are identical twins in real life, Trent does look slightly different than Thad. That’s a point Amelia Heinle (Vickie) knows in having been married to Thad until 2017, which also made J.T.’s return to GC within the same calendar year even more intriguing.

Who better to know that J.T.’s evil twin isn’t J.T., as would be claimed, then the actor who distinguished between the real life twins herself? Heinle’s other-side-of-the-camera experience could be uniquely mined if Y&R is taking what would be a tantalizing, faux redux path.