The Young and the Restless Spoilers: J.T.’s Alive and Back for Revenge – Victor and Nikki Targeted in Ruthless Scheme? 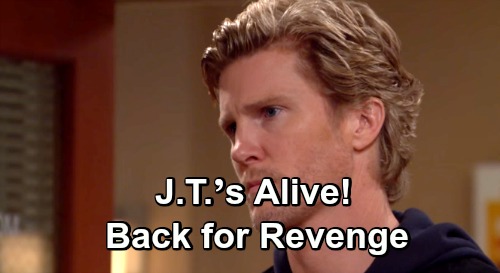 The Young and the Restless (Y&R) spoilers tease that we’ll see another round of J.T. (Thad Luckinbill) shockers and shakeups. The girls’ night gang has been sticking together, but it’s clear that the stress is taking a toll. From the moment they buried J.T.’s body, their lives have been a huge mess. They’ve tackled crisis after crisis, but now they’re facing their worst one yet.

The fire at the stables was set intentionally and the goal is quite clear. The person responsible wanted Rey (Jordi Vilasuso) to dig around and find the planted proof against Victor (Eric Braeden). A gun with only Victor’s fingerprints on it plus J.T.’s bloody shirt adds up to a prime murder suspect.

Who could be out to get Victor? He has plenty of enemies, but there’s one who seems like an especially good option. The framer would have to be someone who knew the body couldn’t be found. This setup only works if the cops believe Victor murdered J.T. with that firearm, so the corpse can’t be around to disprove that.

The person targeting Victor would also need access to J.T.’s blood or at least an old shirt of his with blood on it. More of J.T.’s old clothes will be found in Nikki’s bed soon, so it’s clear that this person wants to mess with her, too. It seems like this mystery villain wants to target all the key players in this storyline.

When you consider all the evidence, it’s not a stretch to think that J.T. could still be alive. Someone might’ve watched out of sight and helped him after he was buried. It’s not like the cover-up crew members are medical professionals. They could’ve easily been wrong about J.T. not having a pulse. He could’ve just been knocked out cold.

J.T. would obviously have access to his own blood along with a motive for framing Victor, who he tried to kill twice. He would also have a motive for messing with Nikki, who will ultimately be attacked and land in the hospital soon. If J.T.’s alive and back for revenge, it makes sense that he’d target both Nikki and Victor.

Of course, this would also provide a solution to some legal issues. The Young and the Restless can’t have Nikki, Victoria (Amelia Heinle), Sharon (Sharon Case) and Phyllis (Gina Tognoni) thrown in prison for their crimes. Y&R fans are already bored with Lily’s (Christel Khalil) prison sentence, so we don’t need any other Genoa City ladies landing behind bars.

Having J.T. be alive and well would go a long way toward fixing the cover-up crew’s problems. That’s especially true if he proves to be a real menace during his potential comeback! The Young and the Restless spoilers say this mystery will continue to unravel, so don’t miss the bombshells ahead.

Do you think J.T. could still be alive? Is he seeking vengeance and targeting the Newman power couple? We’ll give you updates as other Y&R news comes in. Stay tuned to the CBS soap and don’t forget to check CDL often for the latest Young and the Restless spoilers, updates and news.