The Young and the Restless Spoilers: J.T.’s Luck Runs Out, Can’t Escape Death Again – Bloody Battle with Victor Ahead

BY Kinsley Goldman on July 10, 2018 | Comments: one comment
Related : Soap Opera, Spoiler, Television, The Young and the Restless 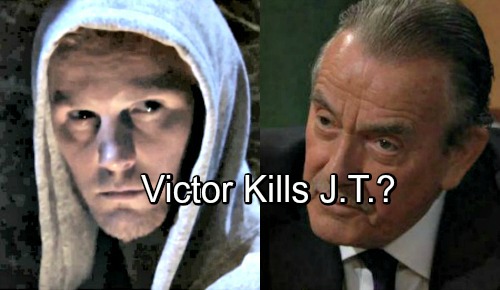 The Young and the Restless (Y&R) spoilers tease that Victor (Eric Braeden) will prepare for a fierce battle. He’ll receive a threatening message and it looks like it’ll come straight from J.T. (Thad Luckinbill). Victor won’t be afraid of his vicious enemy, who’s tried to kill him on more than one occasion. He’ll be too focused on revenge to worry about anything else.

Of course, there’s no guarantee this J.T. is the real one. Soaps have been known to go for doppelganger plots fairly often. After Victor found Marco (Peter Bergman), he fooled even the people closest to Jack (Peter Bergman) for quite some time.

Still, we have to be cautious like Victoria (Amelia Heinle) and some of the other cover-up crew members. Phyllis (Gina Tognoni) will continue to have doubts, but Sharon (Sharon Case) and Nikki (Melody Thomas Scott) are believers thanks to that horrific J.T. sighting. None of them want this to be true, but they have to operate under the assumption that it is.

If J.T. really survived, it wouldn’t be the first time Y&R or any other daytime drama brought someone back from the dead. There’s a way to explain almost anything on soaps. The explanations aren’t always believable, but these shows dish them out nonetheless.

Let’s say somebody spied on the cover-up crew burying J.T. that night. With some potential help, perhaps he or she dug J.T. up right after his burial. This person may have had a good reason for not confronting the girls’ night gang. Maybe this individual had to protect his or her own identity for some reason.

In the soap world, all that seems reasonable. Emotions were running high at Victoria’s house that night. They were all pretty frantic, so they could’ve missed J.T.’s faint pulse. Regardless, there’s still a chance that J.T.’s truly alive. If that’s the case, he may not be alive for much longer!

Wouldn’t it be a soapy twist if J.T. narrowly escaped death only to be killed by the man he attempted to murder? Since J.T.’s walking into a showdown with Victor, The Young and the Restless spoilers say that’s certainly an option. Victor will be out for blood, so J.T. had better be careful. Even if this guy’s a phony, he could be going down.

Do you think J.T. will actually bite the dust this time? Will Victor kill him during their faceoff? Is this the real J.T. or a sneaky lookalike? We’ll give you updates as other Young and the Restless news comes in. Stay tuned to Y&R and don’t forget to check CDL often for the latest Young and the Restless spoilers, updates, and news.