BY Marcy Cohen on July 3, 2018 | Comments: one comment
Related : Soap Opera, Spoiler, Television, The Young and the Restless 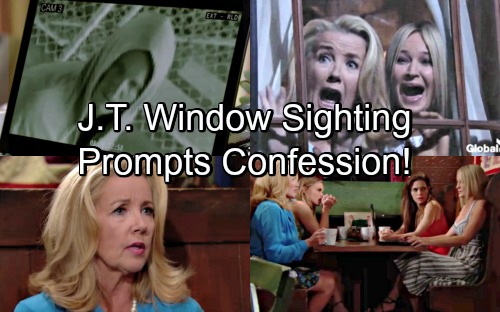 The Young and the Restless (Y&R) spoilers tease that Nikki (Melody Thomas Scott) could be driven to her breaking point. The cover-up crew has been battling plenty of stress lately. Ever since they buried J.T.’s (Thad Luckinbill) body, all four of them have been on edge.

Phyllis (Gina Tognoni, Nikki, Sharon (Sharon Case) and Victoria (Amelia Heinle) are definitely stuck in a dangerous alliance. If one of them blabs or slips up in any way, they could all land behind bars. Unfortunately, the drama’s about to explode thanks to the threat at Newman. This could easily drive Nikki to confess what they’re all hiding.

Phyllis seems like a tough nut to crack, so she may be able to handle a little more chaos. Victoria also knows how much is at stake, which means she might keep her mouth shut, too. However, Nikki and Sharon will face a shock that leaves them rattled. They’ll see a man who looks like J.T. outside the window, so that could certainly prompt some confession desires.

Y&R spoilers say Sharon and Nikki will freak over this terrifying sight. After their screaming dies down, they’ll wonder what they should do next. Nikki might feel like they need to call the cops and spill everything. She may think that since J.T.’s apparently alive, they’ll get by with a slap on the wrist.

Of course, there could be a huge flaw in that plan. There’s a good chance J.T. didn’t survive after all. Someone’s probably just going to a lot of trouble to make it seem that way. Regardless, Sharon may not want to risk it. At this point, this is about more than just her or even the cover-up gang.

Sharon doesn’t want to mess up her relationship with Nick or make matters worse in the custody battle. Since she was the real problem during arbitration, adding another arrest to her record could mean disaster. Sharon and the others may push Nikki to keep quiet, but this could still be the beginning of the end.

How long can they really silence nervous Nikki? The Young and the Restless spoilers say Nikki will lose control next week, so that could lead to bad news. If Nikki fears for her family’s safety, she may feel like she has to tell Paul (Doug Davidson) everything. Nikki may believe they’ll get off the hook, but that may not be the case if J.T. remains worm food!