The Young and the Restless Spoilers: Jack and Ashley Face New Dina Crisis Together

BY Kinsley Goldman on March 1, 2018 | Comments: one comment
Related : Soap Opera, Spoiler, Television, The Young and the Restless 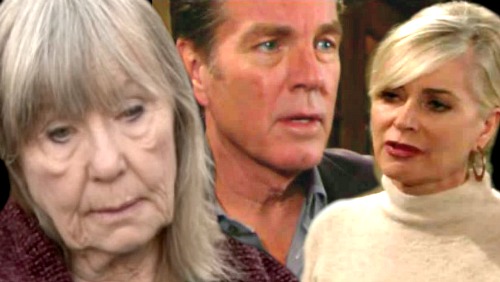 The Young and the Restless (Y&R) spoilers tease that the Abbott clan will face some difficult moments. Jack (Peter Bergman), Traci (Beth Maitland) and Ashley (Eileen Davidson) let Dina (Marla Adams) spend some time with Abby (Melissa Ordway) in Paris, which gave them an opportunity to focus on business matters. However, it’s clear that the family drama’s about to heat up again.

Y&R fans got a little breather from Dina’s issues, but many viewers are ready for the next chapter. Dina’s Parisian getaway gave everyone an opportunity to miss her. She’ll soon be back for some heartbreaking episodes.

Dina’s undoubtedly declined since she left town. She was already causing serious incidents in GC and showing major signs of confusion. Perhaps Abby will call with news of something that went down in Paris. On Friday, March 2, Jack and Ashley will put aside their differences to focus on a crisis. There’s a good chance that Dina will be at the center of it.

Y&R buzz says Dina’s probably becoming too hard to handle, so Abby’s going to need some help. The Young and the Restless spoilers say Dina’s condition could help Jack and Ashley patch things up. However, they may not be the only ones bonding throughout all of this. Jack may lean on a familiar shoulder down the road.

Phyllis (Gina Tognoni) hurt Jack deeply by cheating with Billy (Jason Thompson), but they’re in a better place these days. The latest Dina ordeal could bring Jack and Phyllis even closer. They’ve established that they’re friends now, so Phyllis will want to be there for Jack in his time of need.

Once Jack and Phyllis connect on a deeper level, it could cause problems for “Philly.” You can bet that Billy will be wary of their growing bond. Mal Young, Y&R’s head writer and executive producer, seems quite fond of the Billy and Phyllis pairing. He may not be ready to break them up yet, but he could give them this obstacle to overcome.

Perhaps some jealousy could actually be a good thing. It could push Billy to pop the question and lock down this romance. He truly loves Phyllis, so he needs to make his move!