BY Kinsley Goldman on April 26, 2018 | Comments: one comment
Related : Soap Opera, Spoiler, Television, The Young and the Restless 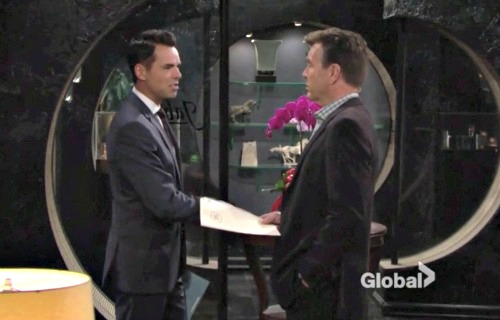 The Young and the Restless (Y&R) spoilers tease that big trouble’s ahead for the Abbotts – and non-Abbotts! Y&R fans know that Dina (Marla Adams) spilled a shocking secret. She insisted that Jack’s (Peter Bergman) father was another man, so Ashley (Eileen Davidson) and Abby (Melissa Ordway) got DNA test confirmation.

On Thursday’s episode, April 26, the secret falls into Kyle’s (Michael Mealor) hands. He’ll have a hard time wrapping his head around Jack’s paternity! Will Kyle let Abby and Ashley know he’s in the loop? It looks like he’ll keep the news to himself initially, but he may blurt something out to them later. Kyle will definitely mull over how to use this to his advantage.

However, another threat could emerge and it’s one the rest of the Abbott clan won’t see coming. The Young and the Restless spoilers say there’s a good reason for Billy’s (Jason Thompson) sudden return to Jabot. Y&R offered another interesting clue in a recent episode. Jack praised Billy’s ideas, but made it clear that he’s the boss. It’s the perfect setup for Jack to lose the CEO spot to Billy later.

If the DNA results are correct, Jack and Kyle aren’t blood Abbotts. Of course, Ashley and Abby aren’t related by blood either. Traci (Beth Maitland) has no interest in running the show at Jabot and she wouldn’t make things rough on her siblings anyway. That leaves Billy to make his move and go for the throne.

Naturally, this should reignite Jack and Billy’s rivalry. They made peace after Billy got trapped in The Underground fire, but the war could soon be back on. There may be other consequences for Billy as well. Phyllis (Gina Tognoni) has a romantic history with Jack and still thinks of him as a friend. How’s she going to feel if Billy gets ruthless? Billy took Jack’s wife and now he’s probably going to take his job!

It sounds like Billy’s looming power trip will bring drama. Phyllis has already been annoying Billy by bonding with Nick (Joshua Morrow). Once Billy causes problems on his side of the relationship, it could begin to fall apart.

Whatever the case, Jack’s paternity will be exposed publicly during May sweeps. It’ll kick off the next exciting phase of this storyline, so stay tuned. We’ll give you updates as other Young and the Restless details emerge. Stick with Y&R and don’t forget to check CDL often for the latest Young and the Restless spoilers, updates, and news.