The Young and the Restless Spoilers: Jack’s Paternity Search Ends – Circles Back To John Abbott After Ashley’s Deception Exposed

BY Sean O'Brien on October 1, 2018 | Comments: one comment
Related : Soap Opera, Spoiler, Television, The Young and the Restless 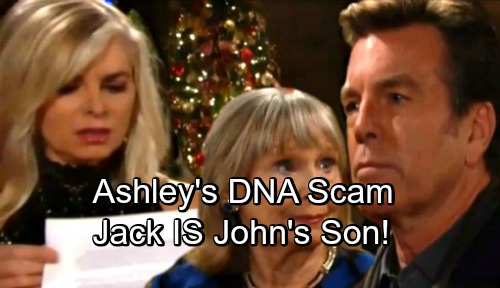 The Young and the Restless spoilers tease that John Abbott (Jerry Douglas) appears increasingly likely to be confirmed as having once and always been Jack’s (Peter Bergman) father. Wait! How?

After sweating out a blood link to Victor (Eric Braeden) through Albert Miller (George Kennedy), Y&R’s paternity storyline bleeds on. But executive producer and head writer Mal Young advised viewers months ago to keep watching before any conclusions were drawn about the show’s history being rewritten.

Daytime Emmy Award-deserving actor Marla Adams’ (Dina) dialogue sparked this long arc months ago when she told Abby (Melissa Ordway) that John wasn’t Jack’s dad. However, follow through DNA tests that half-matched Jack to Traci (Beth Maitland) and provided no match to Billy (Jason Thompson) must be reinterpreted so that Jack is restored as an Abbott.

As Y&R fans know, Traci came back to town on the premise of helping to convince Billy to turn away from gambling. But that setup also serves to further Jack’s search for his father.

Logically, Jack and Traci would still be a half-match if they share Dina as their mother, which they do. But the DNA test that Ashley (Eileen Davidson) initiated appears to prove that Jack and Traci don’t share the same father.

Later, Jack asked Billy to test their samples. That reveal confirmed no maternal match, as has always been known, but also no paternal link.

However, Billy and Traci’s samples haven’t been tested against the other’s. So, theoretically, they could have a father who isn’t John Abbott. If that plot point is explored and proves true, both characters might, plausibly, share the same father. But that doesn’t seem to be the direction Mal Young is taking.

Jack told Nick (Joshua Morrow) that his paternity trail has grown cold, which implied that the seemingly unexplored Stuart Brooks (Robert Colbert) connection isn’t being pursued, or at least it hasn’t been yet. That does seem odd considering the lengths that Kyle (Michael Mealor) took, via his Phillip Chancellor II (Donnelly Rhodes) grave-dig.

However, Jack’s romantic dalliance with one of Stuart’s daughter’s makes that match a non-starter. Unless said daughter isn’t Stuart’s offspring. But would a history rewrite involving one deceased character and another that’s been off-screen for decades be compelling?

Unless new information is about to be presented to the audience, John’s son will be restored to his rightful place in Y&R’s lore. Right now Y&R buzz is pointing at exiting Ashley as the culprit in a DNA scam played on Jack – her motivation is obvious. Peter Bergman’s character’s name was, is, and should always remain Jack Abbott.