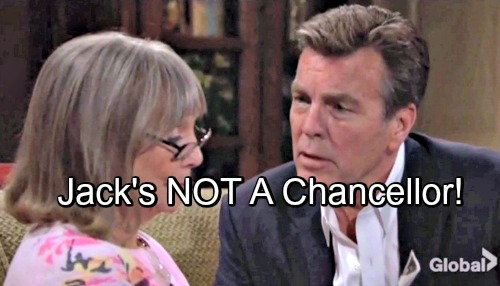 The Young and the Restless spoilers tease that Jill (Jess Walton) will fight the exhumation of her beloved Phillip’s (Donnelly Rhodes) body unless evidence can be found that supports Jack’s (Peter Bergman) theory that this man is his real father. Maybe John’s (Jerry Douglas) remains should be tested instead? Yes, there’s a common sense thought.

A handful of months ago Jack lamented welcoming Dina (Marla Adams) back to Genoa City. His life supposedly went down hill after she arrived. Apparently Jack hasn’t watched playbacks of his storylines during all of the years that Adams’ former side character wasn’t around.

Dina’s Alzheimer’s condition naturally made her initial paternity claim about Jack deeply suspicious. Abby (Melissa Ordway) was floored by the revelation, especially considering her mom’s past biology shocker. Ashley (Eileen Davidson) was rightfully uncertain. But the DNA test she had conducted and the one that actually haven’t proven anything, or even been productive.

Why would Jack reject the idea that he was a half-sibling match with Traci (Beth Maitland), but then accept the non-sibling match with Billy (Jason Thompson)? Both outcomes could mean that John didn’t father Traci and Billy, instead of leaping to an affirmation that Jack never had Abbott blood in his veins.

Now Jack asks Cane (Daniel Goddard) to have Phillip exhumed? Why in the names of Madame Mergeron and John’s ghost didn’t Jack think that he should have his previously presumed father’s remnants disturbed? Something is amiss when there are too many logical questions within a soapy arc.

Possibly readers can be helpful in this regard, but did the Abbott family have John cremated? This scribe can’t recall if this plot point was ever written into the script. If he wasn’t, then dig up that coffin, put on a mask and gloves, open the lid, hope that Barnabas Collins (Jonathan Frid doesn’t bit ‘ya), take a bone fragment, say a prayer, close the lid, lower the aged internment back down, and throw dirt on it Vickie Newman (Amelia Heinle) style. Then, have a definitive DNA conducted!

By gosh and by golly, has Jack gone dumb? Y&R writing staff and TPTB, can all of you explain why wouldn’t Jack, or anyone else wouldn’t have thought of this obvious answer? Yes, we are all asking each one of you these questions.

As the audience waits for logic to appear in GC, or Jack to wake up, the Abbott and Chancellor families are in an uproar. Cane isn’t off-base in this regard, even though he mostly wants to protect his job at CI.

Soon Jill will arrive. She’ll take no prisoners and likely help a climax to be reached in this intriguing, but also frustrating tale. CDL is a leading source for everything linked to The Young and the Restless. Check back regularly for Y&R spoilers and news!