The Young and the Restless Spoilers: Kyle Double-crosses Jack, Seeks the Throne Himself – Victor Sets Jabot Up for Destruction

BY Heather Hughes on May 23, 2018 | Comments: one comment
Related : Soap Opera, Spoiler, Television, The Young and the Restless 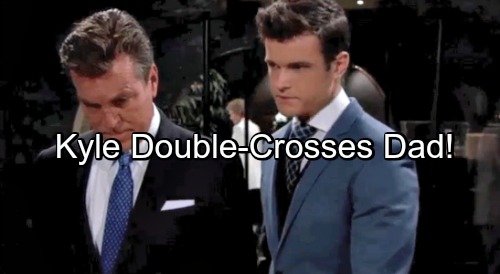 The Young and the Restless (Y&R) spoilers tease that Kyle (Michael Mealor) could be plotting another serious betrayal. He’s made it clear that he can’t be trusted. Kyle insists he’s on Jack’s (Peter Bergman) side, but is he really? When it comes down to it, Kyle’s only looking out for number one.

Jack undoubtedly likes having Kyle in his corner, especially now that they know they aren’t Abbotts. Y&R may change them back to blood family members eventually, but Jack and Kyle fully believe they’re outsiders at the moment. Jack’s desperate for support, so he may strengthen his bond with Kyle throughout all this.

However, Kyle’s the kind of guy who craves power. He may not be content to play second fiddle to Jack at Jabot. Even if they can defeat Billy (Jason Thompson), Kyle may have the top spot in mind. He would love to score the CEO position and start running the show.

Kyle’s plan might be to use Jack to his advantage and double-cross him later. Once they take down Billy together, it could become every man for himself! Meanwhile, Ashley (Eileen Davidson) will do some plotting as well. She’ll hope she can get rid of the blood-Abbott clause and take the lead at the family company.

Ashley probably won’t think Billy will be a problem. He’s already getting cocky and that always sets a character up for a fall. That means Ashley will just need to focus on Jack as her rival. Jack’s behavior has been pretty wild lately, so Ashley may be able to exploit that. She can insist that Jack’s unstable and argue that he’s not what Jabot needs right now.

Of course, Ashley may not count on Kyle emerging as a CEO frontrunner. He’s got Victor (Eric Braeden) on his side, so he might be able to sabotage Ashley’s quest for the throne. After all, Victor may be miffed at Ashley once she bails on Newman.

Besides, making Kyle head honcho would be in Victor’s best interest. Kyle’s young and inexperienced, so he’d be easy for Victor to destroy. Once Jabot’s in Kyle’s hands, Victor would have the company right where he wants it. He could completely annihilate his competition! The Young and the Restless fans will be anxious to see how this plays out.

Do you think Kyle will double-cross Jack and face the same treatment from Victor? Is this all part of Victor’s long-term strategy? The Young and the Restless spoilers say more corporate chaos is ahead, so stay tuned. We’ll give you updates as other Y&R news comes in. Stick with the CBS soap and don’t forget to check CDL often for the latest Young and the Restless spoilers, updates, and news.