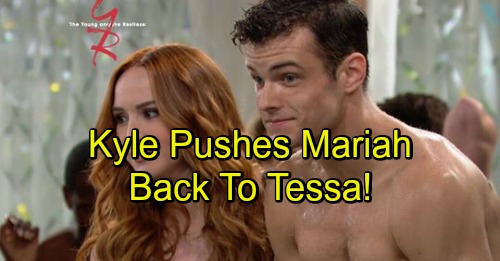 The Young and the Restless spoilers tease that Kyle’s (Michael Mealor) influence will be creating an opening between Mariah (Camryn Grimes) and Tessa (Cait Fairbanks). A Messa redux appears on the verge of happening. Y&R’s devoted fans felt that Mariah’s initial failure to start a relationship with Tessa many months ago wasn’t an end. Instead, it seemed like the show simply shelved Messa for awhile.

Noah (Robert Adamson) fell hard for Tessa after she arrived in town. His availability after Marissa’s (Sofia Pernas) departure from Genoa City allowed Nessa to form. The short-lived couple subsequently split at Noah’s demand. Mariah kissed Tessa during a group trip last year. Noah was unaware that his half-sister did that, learning many months later about the lip smack.

Tessa was genuinely into Noah during the time they were together. She also told Mariah that she was flattered, but that they wouldn’t have a relationship at that time. The ender to her comments openly implied that Tessa was bisexual, which is also what Mariah may be.

Y&R’s choice to address these personal issues does not represent new ground. Societal attitudes have changed through the years on this topic. Depending on one’s point of view, these beliefs have adjusted, evolved, devolved, or whatever. Each soap opera fan was, is, and will only ever be an expert on herself, or himself and therefore can only guess what Mariah, Tessa, or whoever logically think and emotionally believes.

This scribe is heterosexual and fully realizes that all other people on the planet and in Genoa City aren’t identical to himself. With seven billion-plus people available that makes sense. He values traditionally-minded individuals as well as those who think they aren’t that. All traditions merely represent human choices which are then followed.

There is room for everyone on this rock for us all, as Y&R is likely to portray this summer when it more deeply explores Messa, or Teriah, if one prefers.

Choosing Grimes for this spotlighted storyline is a savvy choice. She was, in the opinion of many, the greatest child actor in Y&R’s history. She has become an equally solid adult actor during her second run on the show, as her portrayal of an entirely different character is proving.

Fairbanks was a welcomed addition to the cast last year. Tessa is an engaging character dramatically and offers the added bonus of being a talented singer and musician. Of course, Fairbanks is credited for that part of Tessa’s ability.

Grimes and Fairbanks exhibit engaging on-screen chemistry. Mariah has a harder shell, while Tessa is more vulnerable. Underneath, they are similarly tenderhearted. Yes, the coming storyline involving these likable characters should prove to be intriguing.