BY Heather Hughes on October 8, 2018 | Comments: one comment
Related : Soap Opera, Spoiler, Television, The Young and the Restless 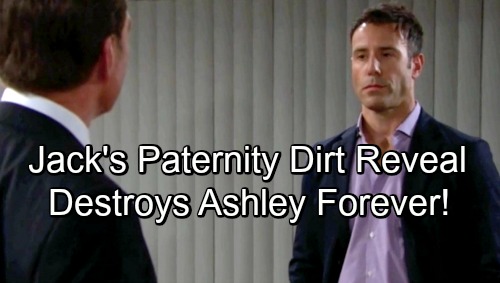 The Young and the Restless (Y&R) spoilers tease that Ashley (Eileen Davidson) will finally get her wish. After the blood-Abbott clause is eliminated, Ashley will happily take the throne. She’ll hate what Billy (Jason Thompson) had to go through, but she’ll be pleased that she came out on top.

Kyle (Michael Mealor) will want a reward for his part in all this. Without his help, Ashley probably wouldn’t have been able to score the CEO spot. Kyle will want the COO position for himself, but Ashley will nix the idea. She’ll argue that Kyle went too far in his mission to destroy Billy. Ashley won’t think Kyle deserves a promotion, so she’ll dash his dreams.

Later, a mistake will come back to bite Ashley. She apparently sought assistance from the wrong person. Y&R fans will remember Andrew (Ryan McLaughlin), who met with Ashley recently. She claimed he was a new chemist she’d been doing some consulting with.

However, Andrew’s probably been doing Ashley’s dirty work. The Young and the Restless spoilers tease this involves Jack’s (Peter Bergman) paternity woes. Perhaps Andrew made sure those DNA results worked in Ashley’s favor.

It’s weird for Ashley to be upset about Billy’s downfall when she seemingly caused Jack’s suffering. Nevertheless, maybe Ashley felt like Jack deserved if after the way he treated her. She may have regrets now, but she’s in too deep. That’s exactly what Andrew will be counting on when he demands more cash.

Ashley may suggest that their business has concluded. She might have some leverage she can use to keep Andrew under control. At least Ash will think she can control him! In reality, this wild card’s about to cause serious issues.

The Young and the Restless spoilers say Andrew will decide to pay Kyle a visit. He’ll reveal that he has major dirt on Ashley, so Kyle can have it if the price is right. It appears Andrew and Kyle will make a deal. If Ashley indeed paid Andrew to rig the DNA tests, that’s something Kyle would want to know.

Kyle could hold this over Ashley’s head and seek the throne for himself. Then again, he could decide to focus on his dad’s feelings. Kyle might plan to spill the news to Jack and let Ashley pay. Regardless, Jack will make a startling discovery in the week ahead and Ashley should be on the receiving end of his wrath.