The Young and the Restless Spoilers: Kyle’s Mystery Mission – Abbotts and Newmans In For A Big Surprise 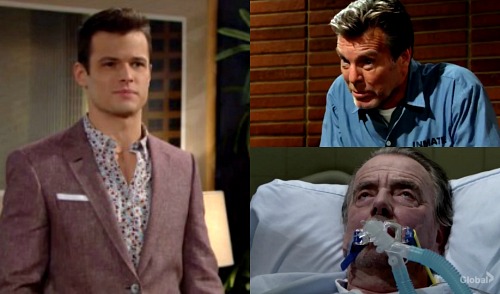 The Young and the Restless spoilers tease that Kyle’s (Michael Mealor) initial plans may be changing. It’s clear that he planned to return to Genoa City in order to implement the scheme he and Victor (Eric Braeden) had been developing. But The Moustache’s incapacitated condition provides an unexpected opportunity for Jack’s oddly maniacal son.

It appears the idea was for Kyle to help Victor damage Jack (Peter Bergman), who would have still been working as Jabot’s Chief Executive Officer. Since Jack was issued a blue jump suit, Kyle took advantage of the situation and has become Jabot’s top dog.

Ashley (Eileen Davidson) prepared a response to her nephew’s power grab. The Jabot Board of Directors would hire Billy (Jason Thompson), then appoint him as CEO. Kyle blocked that attempt by saying he’d fire Billy before the anticipated ascension took place.

One would think that the Board would oust Kyle. It would be fully capable of doing so, no? If not, then Mealor’s character must be controlling its majority.

Separately, something interesting took place when Kyle went to visit Victor in the hospital. He waved his hand in front of Victor’s face in an attempt to prove the old boy wasn’t faking. Partially done in jest, Kyle’s physical move revealed the shallowness of his feelings for the Black Knight. Victor is a means to an end and nothing more to cold-hearted Kyle.

Considering the above analysis, assuming that’s true, Kyle will then have no problem also disrupting any Newman or that family’s company. He’ll be able to pursue this route because of the hidden knowledge he retains. This withhold involves the aforementioned plan he and Victor concocted.

All seasoned Y&R fans know Victor has only allowed Kyle in on whatever minimal amount of information was needed to attack Jack, with however they were (are) planning to do that. So it’s not as though Kyle was being tapped to take over for Victor, right?

A recent dream Jack had while in his cell had Victor announcing a partnership with Kyle. Their collaboration was going to allow Kyle to create a beauty company under the Newman umbrella. That imagined scenario isn’t likely far off from what Jack’s rivals have been planning.

In exchange for Victor’s help, Kyle likely had to supply Jabot insider information to Victor. Viewers saw that Jack was genuinely surprised by Kyle’s no-confidence vote a handful of months ago. It was at that point the character Mealor has been tapped to play showed his hand. He wants his father out.

Now, based upon circumstances, Kyle will continue working against his dad and freelance without Victor if need be as well. As to what Kyle’s plan was, or is becoming, well, that’s the mystery to be revealed. Of course the coming Abbott paternity explosion is going to shake up whatever Kyle has in mind in a big way. CDL is a leading source for everything linked to The Young and the Restless. Check back regularly for Y&R spoilers and news!