The Young and the Restless Spoilers: Kyle’s New Romance With Lola – Will Lola Bring Out The Good In Kyle?

BY hellodrdavis on September 12, 2018 | Comments: 2 comments
Related : Soap Opera, Spoiler, Television, The Young and the Restless 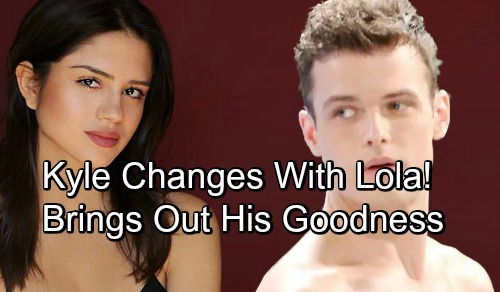 The Young and the Restless spoilers tease that Kyle (Michael Mealor) is headed for a new romance. He’s been expending a lot of his energy lately on Summer (Hunter King) and the distasteful bet he had with her. The two bet that if Summer couldn’t get Billy (Jason Thompson) into bed by a certain date, then she’d sleep with Kyle.

As it turned out, Summer lost the bet, and indeed she and Kyle will be hitting the sheets to settle up. But then what? It’s not like Summer and Kyle have a relationship with a bright future ahead of them. Summer is still keen on continuing her pursuit of Billy, and Kyle really isn’t interested in a future with Summer.

That’s where some new blood comes in. Lola (Sasha Calle) is set to make her first appearance on Y&R on September 14. Lola’s the younger sister of Arturo (Jason Canela) and Rey (Jordi Vilasuso) and shares an apartment with Arturo. It looks like Lola will catch Kyle’s eye.

And it appears that Lola will be the polar opposite of Summer. Y&R spoilers say that Summer’s relentless pursuit of Billy will drive Kyle toward someone new, and that this person will be someone unlike Summer.

And wouldn’t that be great for Kyle? He’s been really dragged down with Summer and her antics, and we’ve seen him spiral downward quite a bit. He’s become pretty ruthless lately, goading Billy into gambling by using Sinead (Lira Kellerman) and telling Phyllis (Gina Tognoni) about Summer’s ticket to Philadelphia to surprise Billy.

It would be nice to see Kyle get involved with someone new – someone who’s a good person at heart that could bring out the best in him. Of course, it remains to be seen just what kind of person Lola really is, but chances are she’ll be far less devious and self-centered than Summer. Perhaps she’ll be a breath of fresh air for Kyle.

Are you looking forward to a nice fall romance between Lola and Kyle? Stay tuned to the CBS soap and don’t forget to check CDL often for the latest Young and the Restless spoilers, updates, and news.